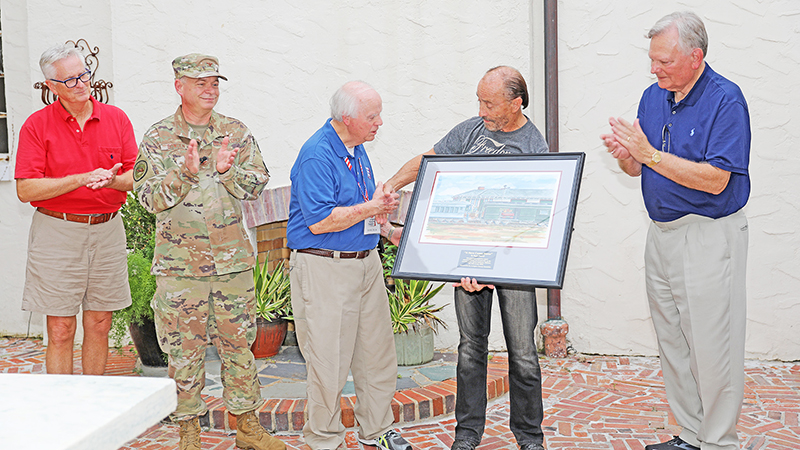 On Thursday, Covington Veterans Foundation founder John Vick presented a print to Lee Greenwood before the entertainer took the stage in Andalusia. On hand for the presentation were, from left, Roger Powell, Ben Bowden, Vick, Greenwood, and Mayor Earl Johnson. (SUBMITTED PHOTO)

Just before Lee Greenwood took the stage at July JAMZ in Andalusia Thursday night, he met with a man who was instrumental in his appearance here.

John Vick is the founder of the Covington Veterans Foundation and the board chairman and CEO of Southern National Corp., parent company of CCB Community Bank.

Vick founded the Covington Veterans Foundation, which partnered with the City of Andalusia to bring the Vietnam Traveling Memorial Wall to Andalusia, and convinced CCB Community Bank to sponsor Greenwood’s appearance as part of that four-day event.

A Navy veteran, Vick always says that his interest in veterans has its genesis in his childhood, when he and his family lived in Red Level, just across the tracks from the railroad depot. He can remember seeing the coffins of World War II soldiers on the train.

Shortly after he began the veterans foundation, he commissioned local artist Roger Powell to paint that memory for him. The resulting painting hangs in Andalusia City Hall. Last week, he presented a framed print of that image to Greenwood.

Vick, who writes a weekly column about veterans for The Andalusia Star-News, wrote about that early memory, and had Circuit Judge Ben Bowden, who is president of the Covington Veterans Foundation, read “A Hero Comes Home.”

“After WW II, my family moved to Red Level, Alabama, in 1946. We lived in a large frame house on a service road, just across the tracks from the Louisville and Nashville [L & N] Railroad depot. I had not started school yet and enjoyed sitting on the front porch watching the trains go by. Sometimes, the passenger train would stop at the depot to load or unload passengers. Occasionally, the train carried an extra car that was marked “Railway Express” and it carried a special cargo. That railway car had its doors wide open on both sides, allowing you to see all the way through. In the middle of the open area rested a casket, draped with an American flag and guarded by a soldier in full dress uniform.

“That image of that railroad car with its precious cargo has remained burned into my mind these many years later. My parents told me that beneath that flag, rested the body of an American soldier, killed overseas during the war which was being returned home for burial. The Louisville and Nashville railroad line ran through Andalusia, Opp, Geneva all the way to Graceville, in northwest Florida. They told me that somewhere along that line, the soldier would be returned to his family for burial. Each one of those soldiers had a family awaiting his return home.

“In 2019, I asked a friend, Roger Powell, who is a gifted watercolor artist, to paint that scene that I could still see in my mind’s eye. I searched the internet for photos of a similar scene but was unable to find any, so using my rough sketch, Roger was able to produce the wonderful picture that I titled, “A Hero Comes Home.” That same year, a group of friends joined with me to form the Covington Veterans Foundation, a non-profit, 501 [c] 3 foundation, whose purpose is to honor veterans from our area. “Roger Powell donated his beautiful work of art to our foundation and we paid for the rights to reproduce it.”

Powell also was on hand for the presentation.

“Whenever I create a painting, usually one of an architectural subject, my thoughts are not only focused on the drawing and painting processes, but also on my connection to the subject,” he said. “If it’s someone’s home, I am almost always thinking of my relationship to the family or the house, or imagining who might have lived there. And so it was when I painted ‘A Hero Comes Home’ for John Vick and the Covington Veterans Foundation; reconstructing a memory of loss and sacrifice and freedom all the while thinking on what that means to you and me, to stand on the shoulders of the fallen.

”It is such an honor to have the original hanging in the Andalusia City Hall, to have been included in the presentation of a print to Lee Greenwood, and to reflect this weekend on what freedom means for us all,” Powell said this week.

Greenwood was most gracious in his acceptance of the framed print and said he would cherish it.

The inscription on the print reads: “Presented to a great American patriot, Lee Greenwood, on the occasion of his visit to Andalusia, Alabama, this 28th of July, 2022 by the Covington Veterans Foundation.”