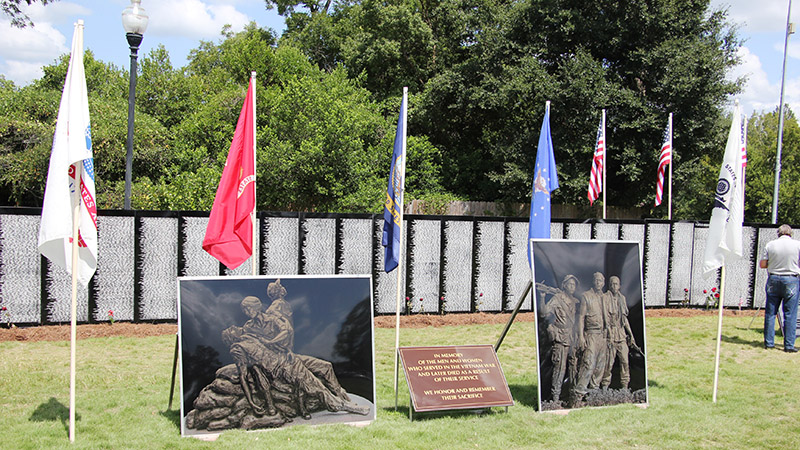 Many contributed to the success of the Vietnam Traveling Memorial Wall display in Andalusia last week. (PHOTO BY ROBERT BLANKENSHIP)

Last Sunday, a man approached the locator tent at the Vietnam Traveling Memorial Wall seeking assistance finding the name of someone who had died in Vietnam.

Databases allowed volunteers to search by name, hometown of record, and other criteria. This man, Drew Cook, only had two pieces of information: the man’s last name and the approximate date on which he fell.

Fortunately, we had some savvy people volunteering in the tent. They were able to help him determine that the full name of the man to whom he had come to pay tribute was Harry Gordon Prince Jr. of Salem, Alabama, who was 23 when he died in Vietnam. When the Army came to tell Mrs. Prince that her husband had died, Drew Cook was in her classroom at Montezuma Christian Academy.

Fifty-one years later, that moment still resonated enough with Cook that he wanted to pay his respects. But this story gets better. Among the volunteers working the venue Sunday afternoon were Dwight and Babs Mikel. Mrs. Prince – Charlotte Carter Prince Penney – and Babs are cousins. Touching and tearful moments followed as the story was told and retold.

This story and many more like it would not have been possible if many, many people had not stepped up to make the Vietnam Traveling Memorial Wall’s appearance in Andalusia so special. On behalf of the City of Andalusia and the Covington Veterans Foundation, we’d like to say “thank you” to them all.

First, the city’s maintenance and landscaping crews worked for weeks to get the site in tip-top shape for this event, and had the Wall installed within a couple of hours of its arrival.

The Daughters of the American Revolution spearheaded the effort to have more than 1,200 flags on the front lawn of City Hall as a visual reminder of the number of Alabamians who lost their lives in Vietnam. They also volunteered their time throughout the event.

Covington County Schools Superintendent Shannon Driver made the county’s track and field facility available for staging all of those who came to escort the Wall into town. When the Wall arrived early and there was a UH-1H “Huey” circling overhead waiting for the appointed hour, Mr. Driver immediately said, “Tell them they can land the helicopter on the field.” It was a sight to behold.

Wyatt Sasser was out of town, but sent refreshments for those who gathered to escort the Wall into town (many of whom arrived on motorcycle from as far away as Montgomery), and those who helped erect the Wall.

Andalusia Police Chief Paul Hudson, supported by the Alabama Law Enforcement Agency’s (ALEA’s) escort team, organized the entry into downtown. They were joined by several veterans groups from the region, local owners of antique cars, and interested individuals. Chief Hudson also organized the 24-hour security that was required from Wednesday until Monday morning, including officers from APD, the Opp Police Department and the Covington County Sheriff’s Department.

The Friends of Army Aviation brought the aforementioned Huey as an escort, and, in addition to doing rides, talked with people about the role the aircraft played in Vietnam.

We appreciate Brian Foshee, who in addition to being the best veterans service officer anywhere, often lends his former-Marine voice as emcee of veterans-related events. He did so again at the somber and moving opening ceremony, and was joined on the program by members of AmVets Post 23; Terry Powell; Aubrey McKee; Mayor Earl Johnson; members of the Vietnam Veterans of America Chapter 607; and Johnny Brewer. Collectively, you provided a great ceremony.

To the members of the Gold Star families who were on hand for that, our hearts are ever with you for the sacrifices you made. Thank you for coming to let us honor you.

We purposefully chose our July dates with the thought of asking the Andalusia Area Chamber of Commerce to work with us to make the last installment of the 2022 July Jamz series a patriotic one, and boy, did they come through in a big way! Thank you to our own Three Notch Ramblers – Scott Rogers, Phillip McClung, Richard Moore, Jeff Sellers, Jacob Sellers, and Jeremy Hunt – fabulous local musicians, all, who performed songs from the Vietnam Era as the opening act, sponsored by the Covington Veterans Foundation. CCB Community Bank celebrated its anniversary in a big way throughout July, but capped it off by sponsoring the incredibly talented, entertaining, and patriotic Lee Greenwood. And McDonald’s and Murphy Family Restaurants put a huge exclamation point on the end of the day with their sponsorship of the fireworks show.

The Covington County Commission, Tammy Baxley and the Covington Area Transit System (CATS) helped us get people safely to and from Thursday evening’s activities.

Alan Cotton put the word out early that anyone who wanted to leave something special at The Wall could pick up a long-stemmed rose from Alan Cotton’s Florist at no charge. No one asked Alan to do this, but we were very appreciative of the special touch.

Mrs. Jerri Stroud and the City of Andalusia Ambassadors were on hand to assist for many hours. As always, Mrs. Stroud has a great group assembled, and they are off to a very good start for the 2022-23 year. LBW Ambassadors also worked in the Locator Tent. Thank you, Katie King, for scheduling them.

Blaine Wilson and Wynne Wilson Glenn helped so much with the hype on WAAO, and always had “God Bless the USA” and “Names on the Wall” qued up and ready to go after talking about the planned events. The Star-News gives a large amount of space to veterans issues each week, and last week they gave even more! Fox 107.7, The Opp News, The Florala News, The Elba Clipper, The Evergreen Courant, WSFA, WAKA and WDHN all gave us great coverage, too. Skip Enzor’s beautiful photographs will help us remember last week for a very long time. Preston Sullivan traveled from Tuscaloosa to help with video documentation of the event, and with veterans interviews. Tyler Huber and Clay Herrington, who have interned this summer with the Covington Veterans Foundation, were much help.

All told, about 120 people volunteered their time to work in the locator tent or drive golf carts to help the City and CVF meet its contractual obligation of having at least two volunteers on duty 24/7 once the Wall opened. We were so proud of the way our friends and neighbors showed up and showed out to help. When we issued an “SOS” for volunteers, the response was overwhelming. We kept your numbers, and we will call you again!

Some very special sponsors provided financial support for all of the extras surrounding our hosting of the Vietnam Traveling Memorial Wall.

If you’re not already proud of this effort, heed these words: After the opening ceremony, Richard “Doc” Russo, who manages the Traveling Wall for the Veterans of Brevard and has taken it to cities large and small all over the eastern half of the country, said quietly, “Y’all did it right.”

It took a village, but this village “got it right,” as it so often does. The City of Andalusia and Covington Veterans Foundation cannot thank you enough.

Michele Gerlach is the communications director for the City of Andalusia and the secretary of the Covington Veterans Foundation board. She can be reached at michele.gerlach@cityofandalusia.com, or 334.428.1143.