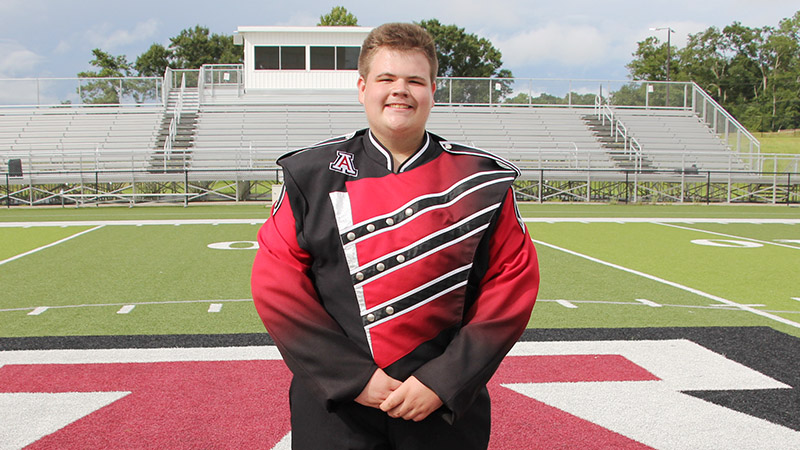 Andalusia High School rising senior Tyler Carnley will see one of his dreams come true this fall as he leads the AHS “A Sound Tradition” Marching Band as the drum major.

“Being the drum major is a dream come true for me. When I was in the eighth grade, I would stand behind the band and direct and watch Tristyn Harrison. Tristyn was one of the drum majors who I would watch direct. I am really looking forward to being able to direct our band under the Friday nights my senior year,” Carnley said.

He will be going into his fourth and final season with the AHS band. Prior to being named the drum major, Carnley played the trombone for three years.

“I feel it is important to be a leader to the younger members to teach them to take pride in their school and everyday life. I’ve had a true desire to be in this position and have worked hard to make sure I honor the high school and the tradition. I’m kind, respectful, and open to learning new things and new ideas. I want to make our senior year memorable at Andalusia.”

When Carnley is not busy with activities at Andalusia, he can be found working at the local Piggly Wiggly.

Carnley named Band Director Bennie Shellhouse, previous drum major Bryson Powers, Piggly Wiggly Store Manager Chantz Robertson, and Cindy Peebles as his influencers. “Mr. Shellhouse and Bryson are my biggest inspiration because they have taught me so much from being a leader to being able to do so much more. Mr. Chantz and Ms. Cindy have given me all the encouragement and support in this very special role,” he said.

His plans following graduation are to attend college and major in business. “I hope the opportunity this year leads for me being able to be a drum major in college.”

He is the son of Angie Kyles and Michael Kyles. His first game leading the band will be Thursday, August 18, as Andalusia hosts in-county rival Opp.