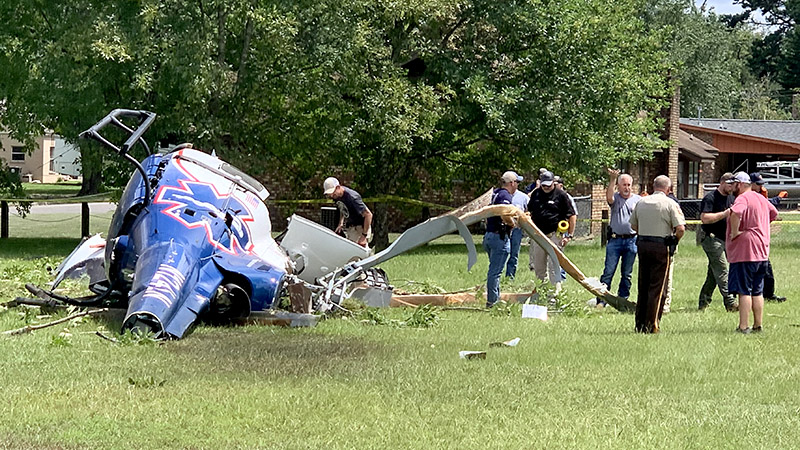 First responders work the scene following a helicopter crash in Andalusia on July 29. The NTSB has released a preliminary report on the accident. (PHOTO BY ROBERT BLANKENSHIP)

The National Transportation Safety Board released a preliminary report on the July 29 helicopter crash in Andalusia.

According to the report, the Eurocenter AS 350 helicopter had departed its base in Evergreen and was traveling to Andalusia Health Hospital to pick up a patient to be transferred to another hospital.

The pilot and one crewmember were seriously injured in the crash and another crewmember sustained minor injuries.

During a post-accident interview, the pilot stated that he remembered reporting 7 miles from South Alabama Regional Airport near Andalusia. Although 79J was not the destination, the pilot made the report on the common traffic advisory frequency for traffic avoidance as an airplane had just departed that airport.

According to the report, “The pilot did not recall the accident sequence. He felt sweaty and clammy toward the end of the flight but was not lightheaded and did not experience vertigo. He remembered someone telling him to “pull up” three times and then remembered being in an ambulance.”

The flight paramedic stated in a post-accident interview that the helicopter was approaching the hospital helipad and descending; however, it seemed low as the helipad was still about 1 mile away. The report stated, “The flight nurse was seated behind the pilot, tapped him on the shoulder and said that they were too low. The pilot replied “yeah, yeah, yeah,” and initially leveled off, but then the nose began to pitch down into another descent. At that point the flight nurse made a mayday call, shook the pilot’s seat and told him to “pullup, pullup, pullup. The helicopter subsequently nosed-up, made a left turn and impacted a field on its right side.”

The flight nurse was critically injured and could not provide a statement.

Witnesses in the field stated that the helicopter flew overhead about 300 feet above ground level, nosed up 90° or more, before turning left and impacting trees, powerlines, and the ground of Packer Field, near Packer Avenue.

The report further states, “The wreckage came to rest on its right side. An approximate 100-feet debris path was observed. The beginning of the path consisted of fallen tree branches and powerlines, followed by the aft tail boom and the main wreckage at the end of the path. The three main rotor blades remained attached to their respective hinges; however, all three star arms were fractured at an approximate 45° angle and the main rotor blades were resting on the ground in a stacked position. The aft tail section separated in two sections, forward of the horizontal stabilizer, and forward of the tail rotor gearbox. The tail rotor system remained attached to the vertical stabilizer. The tail rotor blades remained attached with one exhibiting tip damage and the other partially separated at the root. The tail rotor drive shaft separated at the flex coupling and at the forward steel short shaft. The right horizontal stabilizer exhibited leading edge damage, consistent with a wire strike.”

An Appareo Vision 1000 cockpit video recorder was retained and forwarded to the National Transportation Safety Board Vehicle Recorders Laboratory for data download.