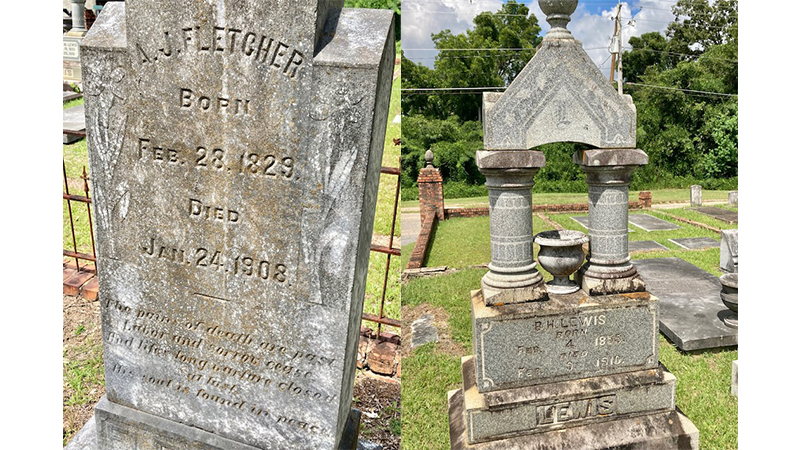 Recently Dennis Murphy of Opp brought to me two volumes from the 1893 Tutwiler Collection of Southern History and Literature, Memorial Record of Alabama. It is my understanding that a concise account of the state’s political, military, professional, and industrial progress was compiled in the 1890s together with personal memoirs of early settlers from the various Alabama counties. The Covington County citizens featured in these sketches include some early settlers of the area who were interviewed in the 1890s. There are descendants of these people still living in the county. Let me share with you a brief summary of each individual.

David S. Barrow, planter and lumberman, was brought by his parents to Covington County in about 1831 when he was three years old. They settled in the woods near old Montezuma. He was one of the very first white settlers in this part of the country living here several years before the Indians were removed and being engaged in several expeditions against them. Barrow was a thoroughgoing, energetic, and prosperous business man, and though of limited education, he was yet of sound judgement. A Missionary Baptist, he was selected for office by his fellow citizens several times.

Hon. William Green Beck, farmer and millman, moved to Covington in 1840. One of the first settlers of Alabama and Covington, he was a successful farmer all his life. A member of the Primitive Baptist Church, Beck had very limited advantages for obtaining an education yet he was one of the most cultured and best informed men in the county. He worked for a good number of years at blacksmithing, woodworking, and mill building. He and his wife lived below the river on a farm of 126 acres where he had a small grist mill. He was elected revenue commissioner in 1844, and in 1882, he was elected to the legislature.

Major S. E. Benton, merchant and farmer of River Falls, was of Irish extraction. Major Benton served in the war of the 1860s where he fought in the battle of the Wilderness, on to Petersburg and Richmond, and finally surrendered with Lee. He eventually owned 1,500 acres in River Falls where he established a store, the first in River Falls. He was instrumental in having a post office established there. He was a prominent and highly esteemed citizen.

John M. Diamond, a planter, was the son of Reuben and Elizabeth Dixon Diamond, natives of North and South Carolina. His mother was a daughter of Jeremiah Dixon, an Englishman who served in the Revolutionary War at the battle of Bunker Hill. In 1823, he came to what is now Covington County and settled in the woods near Fairfield where he improved his farm, started a saw mill, and raised a great deal of livestock including cattle, sheep, hogs, and horses. He was one of the first white settlers, and he became familiar with the customs and habits of the Indians and fought against them in 1836. He shared the hardships and privations of pioneer life with life among his neighbors. He volunteered his services to the Confederate Army but was not accepted on account of his disability. However, he cared for the families of those who went to the field working hard and dividing his earning among his neighbors. He believed in honesty and had a contempt for crooked ways in the business or social world. He owned about 400 acres of land.

Judge Andrew J. Fletcher, planter, came to Covington County in 1849 and was one of the oldest settlers in the county. During the Civil War, he was not subject to military duty having had asthma his whole life. He owned 800 acres of land in different tracts. He was a merchant at Andalusia, was in the saw mill business, and owned a grist mill. Fletcher was in the public life for many years serving as constable, justice of the peace, superintendent of education, tax collector, county commissioner, and probate judge. He was highly respected by all.

Russell Ravenel Gantt, farmer and timberman, was industrious and prosperous and accumulated considerable property. His grandfather was of Scotch-Irish origin and came from Germany in colonial times. He was third in a family of seven sons and six daughters. He was the only one who came to Covington County. All of his brothers but one were in the war. In March 1861, R. R. joined the 22nd South Carolina was wounded but rejoined his company in Virginia. He was in many minor engagements. He was wounded again by a shell in the head and later by a minie-ball which disabled him for the rest of the war. After the war ended, he returned to farming and milling and moved to Covington County in 1872. He lived on his farm six miles northeast of Andalusia where he owned 800 acres and several hundred acres in several small tracts. He married Elizabeth Gantt, a cousin. She was the mother of five children and was a Missionary Baptist. Russell was a democrat but was never a politician or office seeker. He was one of the leading farmers of the county, honest, and popular.

Preston J. Gantt, a lumberman and planter of River Falls, lived in South Carolina until 1867 when he moved to Covington. He lived at Hamptonville (Gantt) for some years. Early in the war, he volunteered in the Confederate War and participated in many of the most important battles. He was captured in Virginia and imprisoned at Point Lookout, MD until June 1865. Upon his return home, he found everything dilapidated and to a great degree destroyed, it having been in the line of Sherman’s March to the Sea. He was the eldest of three sons and six daughters. He came to Alabama with his parents and remained with them until he was twenty-three years old. He began working in the timber business and became superintendent of the shipping department of the Frierson mills. He also engaged in farming owning 1,200 acres covered for the most part with fine pine timber. He married Lena Dunson and they had three children. Gantt was a member of the Andalusia Masonic lodge, a charter member and treasurer. He was a Presbyterian, his father being of Scotch descent, and his wife a Baptist. He stood high amongst his neighbors and friends.

William T. Knowles, farmer and timberman, was born in Pike County. He was the eldest of four sons and six daughters. In July 1861 Knowles joined Company B. of Hilliard’s legion then spent some months in Chattanooga, Knoxville, Cumberland Gap then through the Kentucky campaign and back to Knoxville and Missionary Ridge. He then went to Virginia with Longstreet and fought in the Wilderness and at the siege of Petersburg. He was captured 13 days before the surrender of Lee. He was never wounded in the whole time of his service although he participated in many hard fought battles and skirmishes. He eventually became engaged in farming, milling, and cutting timber. He owned about 5,000 acres of timber individually and about a 1,000 acres in connection with James A. Prestwood. He started in life after the war with nothing and became one of the most extensive land owners in the county. He always gave strict attention to his own affairs. For eighteen years, he served as a justice of the peace. One of Knowles’ peculiarities, was that he never shaved and during the war, he never had his hair cut. At the close of the conflict, it extended below his waist. He was a member of the Missionary Baptist Church and was considered to be one of the reliable and substantial men of the county.

Benjamin H. Lewis, attorney at law in Andalusia, was born in Pike County. His father was a millwright by occupation and was a patentee and proprietor of the Lewis wheel. Lewis was the fourth of nine children. Reared on a farm, he received an academic education in Troy. He then taught school two years and read law with Hon. W. D. Roberts of Elba, Ala. In 1882, he was admitted to the bar at which time, he practiced in Elba for a short time before removing to Andalusia where he built up a fine practice. He not only paid his debts but also accumulated considerable property of more than 800 acres of land in Pike, Crenshaw, and Covington counties, some of it being fine pine timberland, and also built a fine home. In 1881, he met with a misfortune which came near being fatal, falling and maiming his right arm for life. Lewis was one of the most prosperous and popular men of Covington county and was very highly esteemed.

Norman McIntosh, planter, was a son of a former native of Scotland. One of thirteen children, he was brought to the United States from Scotland by his parents when he was about fifteen years old. In 1862, McIntosh joined Company A from Brundidge in Hilliard’s legion and served in the Virginia army. He was wounded in Richmond and was furloughed for sixty days. Afterward he traded positions with a comrade and joined Clanton’s command in Alabama and served until the close of the war. After farming in Coffee County until the year 1870, he became engaged in farming and in the timber business in Covington owning two tracts of 1,000 acres. Commencing after the war with nothing, he became one of the leading farmers and one of the most industrious and enterprising citizens. He married Amanda Nixon of Georgia in 1877. He was a member of the Andalusia lodge and stood well in the community esteemed by his neighbors and friends.

In my next column, I will continue highlighting other early settlers of Covington County who are featured in these volumes. These names may be some of your ancestors who you readers may recognize. They are as follows: Robert H. Miller, William J. Moseley, Dr. John F. Pendrey, James Austin Prestwood, Malachi Riley, Hon. James P. Rosseau, George L. Simmons, John L. Stewart, Hon. Travis W. Straughn, and Windal W. Taylor.

It is admirable that someone in the 1890s traveled the rural state of Alabama and recorded the personal memoirs and history of the state’s early settlers.

Some of these early settlers are buried in Magnolia Cemetery as well as in remote and sometimes untended graveyards in other parts of Covington County. We should all Remember When these men blazed the trails, fought the Indians, cut the trees, planted their crops and ground the corn, killed the wolves, bears, and snakes, built the original crude homesteads, forded the streams, founded the places of worship, reared their families, cut through the wilderness of South Alabama, and worked to establish a civilized society in a county we call home today. GONE BUT NOT FORGOTTEN.