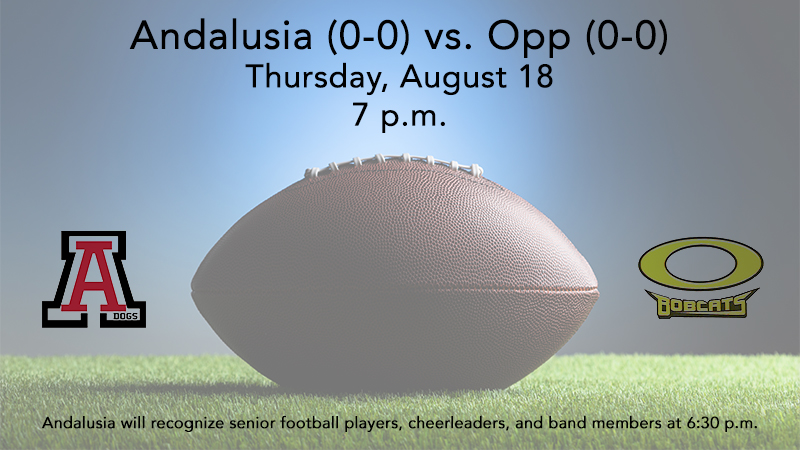 Andalusia is beginning its season with senior night and will recognize senior football players, cheerleaders, and band members beginning at 6:30 p.m.

This year’s meeting will be the 92nd all-time contest between the two programs that first played in 1926. The Bulldogs hold a 51-36-4 lead in the series and have won 15 of the last 16 matchups. The lone win for the Bobcats in that span came in the first round of the 2009 playoffs.

“Practice has been good, and there have only been a few days we’ve had to battle the heat. I don’t know if that’s a good thing or a bad thing, but if you ask the boys, they would say that’s a good thing. I certainly hope that doesn’t into a negative when we get into the game Thursday night. We try to be smart and give them breaks throughout the summer, but the truth is that there’s not a lot of time off,” AHS Head Coach Trent Taylor said.

“Practice has been up and down with the first day of school last week. I’ve never really had a good first day of practice when classes start because there are so many distractions going on. We had a good practice on Monday before the weather and some other scheduling got us and didn’t get as much done, as we wanted to. We’re still playing with a lot of personnel groupings and trying to develop depth,” OHS Head Coach Mike Dubose said.

Both coaches agreed they would be facing a solid season-opening opponent.

“Opp is coming off a great year, and we know a lot about Coach Dubose and the success he has had in his career at multiple levels. Everybody thinks about his time in the SEC and as an NFL coach, but he’s had a tremendous amount of success in this state. You know his team is going to be well-coached and ready to play,” Taylor said.

“They’re very, very good, and his football teams are always well-coached and well-prepared. They have all the intangibles you need to have an outstanding football team. We need to restart this game because it has meant a lot to both communities for a long time. We realize it is a challenge but also look at it as an opportunity for us to grow and become that same type of team,” Dubose said.

The Bulldogs and Bobcats are eager to take the field and see where they stand.

“We’re coming to the point now where we really need to play a game. We want to look at what we’re doing and think if it’s conducive to our kids. We’re returning a good number back on the offensive line but also have a lot of new faces. There’s a lot to be learned from the first game. It certainly adds an air of excitement for the fans that it’s Opp, but the truth is the kids are just ready to get on the field and play regardless of who we’re playing,” Taylor said.

“We will have a great idea playing against Andalusia on Thursday night. I want to see if we play fast and physical, which is what we try to build ourselves on. You have to learn to play the game smart and be able to adjust because some things will go well and others not so well. How do you handle those different environments throughout the course of the game? There are many things we have to do to become a good football team and a good football program,” Dubose said.

Andalusia finished with a 9-5 record in 2021 and reached the semi-finals for the fifth time in six seasons but fell at eventual state champion Pike Road. Opp went 9-3 and made a second-round appearance but fell short to T.R. Miller in Brewton.

In other county action, Pleasant Home will begin the regular season at home against A.L. Johnson. Florala will host Zion Chapel, while Red Level travels to Straughn in jamboree games.