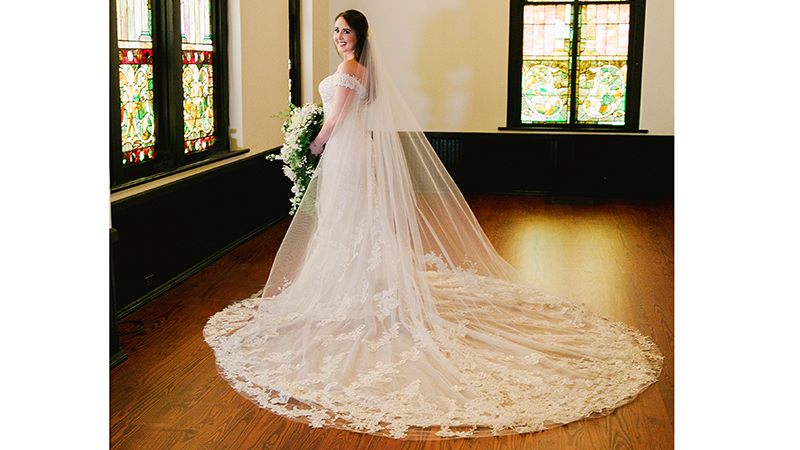 Miss Jacqueline Hope Caton became the bride of Tanner Neal Veasy in an impressive candlelight ceremony at First Presbyterian Church of Andalusia on Saturday, May 21, at half after five o’clock in the afternoon.

The bride is the daughter of Mr. and Mrs. Stephen Todd Caton, Sr. and the groom is the son of Mr. and Mrs. Tony Clint Veasy and Ms. Bridgett Michele Wallace. The Reverend William Gerald Long, former minister of First Presbyterian Church, officiated the double ring ceremony.

Vocal solos by Mr. Jason Mark Gunter included “Praise My Soul the King of Heaven,” “O Perfect Love” by Barnby, and “The Lord’s Prayer” by Mallott. Mr. Westly Schlundt, violinist, accompanied Dr. Hubbard to “Canon” by Pachelbel and “Jesu, Joy of Man’s Desiring” by Bach and for the seating of the grandmothers and mothers. Traditional wedding marches were used for both the processional and recessional.

Vows were exchanged before an altar beautifully decorated in a green and white bridal motif. Large cascading arrangements of white Casablanca lilies, hydrangeas, roses, gladiolas, and Queen Anne’s lace were situated in white urns in front of the pipe organ screen. The beauty of the church’s stained glass windows was enhanced by white pillar candles and magnolia leaves banking each window sill. Family pews were marked with magnolia leaves and white duchess satin bows laced with seed pearls. A large arrangement of white Casablanca lilies and gladiolus adorned the narthex of the church. The arrangement was placed atop an overlay of imported Belgian lace. The flowers in the chancel and narthex of the church were given in memory of Mr. James Barrow Caton, Mr. and Mrs. Donald Durwood Norris, and Mr. Ricky Lavon Wallace.

The bride, given in marriage by her father, was radiant in her wedding gown fashioned of imported Venetian lace over white duchess satin.  The fitted, off the shoulder bodice, which fashioned down the back with tiny self-covered buttons, was adorned with elaborate beadwork and seed pearls. The trumpet form silhouette gracefully extended to a full cathedral train. The French illusion cathedral veil was lined with ornate french lace appliques, beading, seed pearls and iridescents. The bride carried a stunning cascading bouquet of white Casablanca lilies, hydrangeas, roses, gladiolas, and Queen Anne’s lace.

The bride’s attendants were gowned alike in floor length one shoulder gowns of dove crepe fashioned on princess lines. They carried hand bouquets of blue and white hydrangeas and white bridal roses.

The champagne table was covered in an ecru cloth of scalloped Antwerp lace. The champagne was served from a pair of silver champagne buckets by Mr. Gregory Caton, uncle of the bride, and Mr. Stephen Caton, brother of the bride. Magnolia leaves and assorted grapes adorned the table.

The punch table, covered in a floor length ecru cloth with an ornate Irish linen overlay was centered with a silver punch service surrounded by magnolia leaves and asparagus fern. Mrs. Charles Loftin Studstill, Jr., aunt of the bride, presided at the punch table. She was assisted by Miss Cozy Caton Studstill, cousin of the bride.

An exquisite white linen and lace Army-Navy cloth covered the bride’s table, centered with a four tier wedding cake. A trail of white bridal roses cascaded down the tiers elaborately embossed with a swag and filigree motif. On either side of the confection were two five-arm Chantilly candelabras holding lighted bridal tapers adorned with epergnes overflowing with fern, Casablanca lilies, and white roses. Mrs. Evan Anthoney Yates cut the cake which was served by Mrs. Alexander Payne.

The groom’s table was covered in an ecru cutwork tablecloth. Brass candelabras with white tapers flanked the three tier groom’s cake. The chocolate cake with chocolate icing featured orange and blue accents and a replica of the Toomer’s corner oak, a nod to the bride and groom’s alma mater. The table was garnished with  satsumas, grapes, and leaves of magnolia.

The arched entryway of the club was surrounded with a lavish garland of magnolia leaves. Two magnolia wreaths with white duchess satin bows hung on the double doors. Suspended from the octagonal ceiling of the ballroom, were eight boston ferns. The fireplace was banked in magnolia, boston fern, ruscus, and asparagus fern. A grapevine wreath with white hydrangeas and magnolia centered the mantle surrounded by white pillar candles and lanterns. Silver revere bowls gushing with blue hydrangeas, Casablanca lilies, roses, and Scottish thistle centered each table. A silver urn containing an elegant arrangement of gladiolas, Casablanca lilies, roses, and hydrangeas formed a focal point in the center of the dining room.

Following an evening of dancing and entertainment by the Tip Top’s of Mobile, the bride and groom left the club in a vintage, black 1957 Chevrolet sedan. After a honeymoon in St. Lucia, the couple will reside in Andalusia.