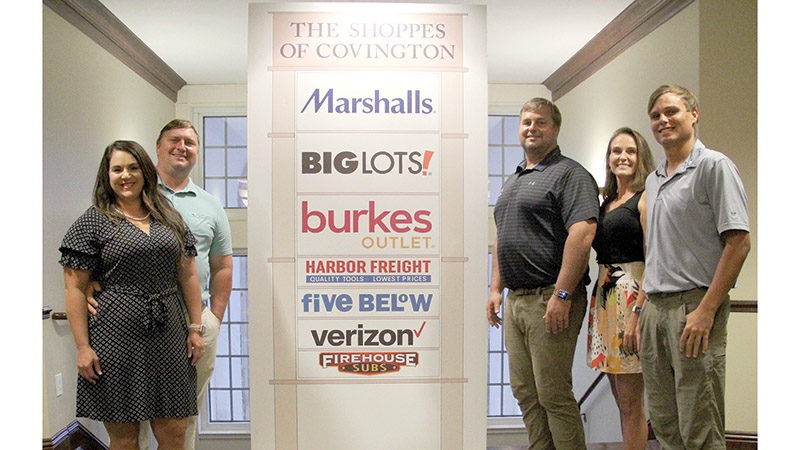 As the Covington Mall continues to undergo its redevelopment process, a name change and five retailers were revealed during a special announcement made Thursday.

Covington Mall, which will become known as The Shoppes of Covington, will bring Marshalls, Burkes Outlet, Five Below, Big Lots!, and Harbor Freight to Andalusia. Five Below is scheduled to be the first retailer to open its doors in December. The other four businesses plan to open by May of 2023.

Marshalls is an American chain of off-price department stores that was founded in Beverly, Massachusetts, in 1956. Burkes Outlet, also known as Bealls Inc., is a private retailer founded in 1915 in Bradenton, Florida. Founded in October 2002 and headquartered in Philadelphia, Pennsylvania, Five Below is a specialty discount store, which sells most of its products for less than $5. Big Lots! is a retail company headquartered in Columbus, Ohio, with roots back to 1967. Founded in Lox Angeles in 1977 and headquartered in Calabasas, California, Harbor Freight is a privately-owned tool and equipment retailer.

“We hope these retailers will offer the public a more diverse shopping experience. With rising gas prices, it will allow everyone to shop local and save gas money. There will be two big impacts on the local community: tax revenue and jobs. The sales tax revenue these businesses will bring to our community will probably be the biggest impact. It will also bring several employment opportunities,” said Covington Mall Owner Michael Jackson.

An artist rendering at the new Shoppes of Covington Mall coming to Andalusia in 2023.

Renovations first began in 2018 when the Jacksons purchased the Covington Mall.

“We started with the smaller structures on the property on the south side of the parking lot. After removing the old Hickory House building to open up space, we gutted and renovated the building that now houses Credit Central, Mary’s Nails, and One Main. Next, we did a facelift on the Verizon and JCPenney buildings on the west side and installed a new roof on the remaining mall. At that point, we started recruiting tenants. When COVID hit in 2020, it set us back two years. We were able to purchase a Firehouse Sub franchise and built that building on the north end of the parking lot we built a Firehouse Subs, which opened in November 2020.”

The five new retailers are expected to generate 150 new retail jobs and an estimated payroll of $3.9 million as well as $18 million in annual retail sales.

“I would like to personally thank Mayor Earl Johnson and the City Council for believing in us. I would also like to thank John Thompson and Andy Wiggins for their advice and support. Thank you to Covington County Bank and specifically Wem Mellown. My relationship with Wem goes back almost 30 years, and we wouldn’t be where we are without him. We would also like to thank everyone that has supported us along the way specifically our families,” Jackson said.

The pandemic has not been the only obstacle throughout the redevelopment process. “Our biggest challenge has been finding employees. We have done 90 percent of all construction ourselves. There are four of us: my partner and brother Shaun Jackson; my son Trey Jackson; my long-time employee Sergio Rodriguez; and myself. We have put in a lot of long hours and hard work, but we always believed it would pay off.”

Changing the name from Covington Mall to The Shoppes of Covington was a difficult decision for the Jacksons to make.

“It had been The Covington Mall for so long. We were torn as to whether to change it at all. In the end, we realized it’s not a mall anymore in the traditional sense. We wanted to keep Covington County a part of it because it belongs to Covington County. The Shoppes of Covington just kind of stuck and grew on us since,” he said.

Jackson added that he is grateful for the experience to renovate the building and bring new retailers to the area.

“As a lifelong resident, I have always loved everything about our community. This community has done so much for me, so I try to give back in any way possible. Having the opportunity to enrich our community in this way is a huge honor.”

Mayor Earl Johnson said the City of Andalusia appreciates what the Jacksons have done and continue to do for their hometown. 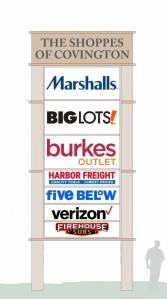 The five retailers above will join Verizon and Firehouse Subs at the newly-named Shoppes of Covington in 2023.

“These are national retailers who analyze markets meticulously before agreeing to open a store. What they know about Andalusia and the people who work and shop here is that we have room in our retail market for expansion and that thousands of potential customers drive past the entrance to the Shoppes of Covington every single day. This project has fallen apart and been put back together more than once through no fault on anybody’s part here but largely due to unforeseen market forces like the pandemic. The Jacksons believed in this project when they made this initial investment in their hometown,” Johnson said.

The first retailer, Five Below, is set to open in December. Others will follow with the final retailer, Marshalls, opening in May. Each retailer will sign a 10-year lease as part of the agreement.

For any questions about the project message the Covington Mall Redevelopment page on Facebook.