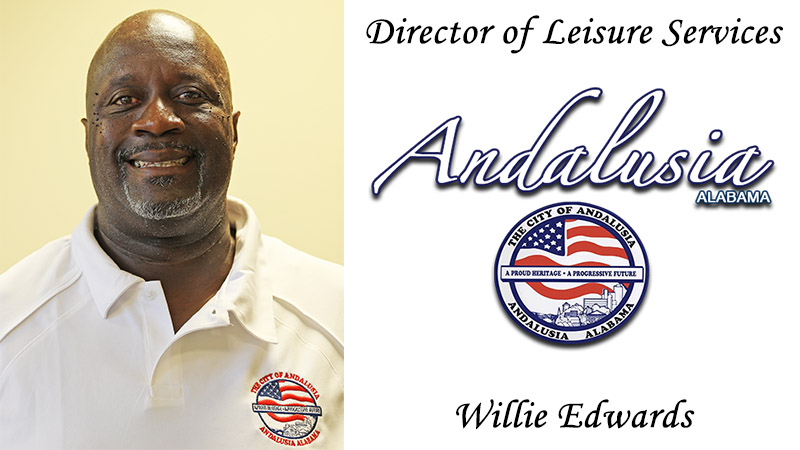 Willie Edwards was introduced to the Andalusia City Council as the City of Andalusia’s new Director of Leisure Services Tuesday. (PHOTO PROVIDED)

Willie Edwards was introduced to the Andalusia City Council on Tuesday as the City of Andalusia’s new Director of Leisure Services.

Edwards most recently served as director of parks and recreation for the City of Opp, a job which he had held since 2011. In addition, he has been head basketball coach for both boys and girls basketball at Opp High School since 2015.

“I have great memories of the coaches who coached me in youth sports,” he said. “They’ve been an integral part of my life up until today. One, Mr. Preston Boutwell, just passed away.”

He said Boutwell taught players about being positive and making every day a good day.

Later, he volunteered as a coach in Opp and in Elba.

It was while working as a paraprofessional in Opp City Schools that he decided to move into parks and rec full time.

“I was working at the school, and I was managing the pool for the city,” he recalled. “I was also refereeing basketball and umpiring baseball. A job opened on the grounds crew, and I decided to make a change. From there, I continued to move up.”

Edwards said the best part of his job is working with kids.

“That’s my joy,” he said. “I want to make a difference in kids’ lives. Hopefully, we can turn the light on and help them see they are somebody and they are important.”

Edwards said his goal in his new role is to enhance the city’s Leisure Services Department in all areas.

“We want to work on finding more things for adults to do,” he said, adding that pickleball is a possibility. “We do a lot of things for youth sports, but there may be a few areas like volleyball we could add.

“We want to make the park an exciting place to be for parents and kids,” he said.

Edwards also is executive pastor of Star of Hope Baptist Church in Luverne, where he has been a minister since 2002.

He and his wife, Shekeitha, are the parents of two daughters, Praise, a student at Auburn University; and Victori, a student at LBW Community College.