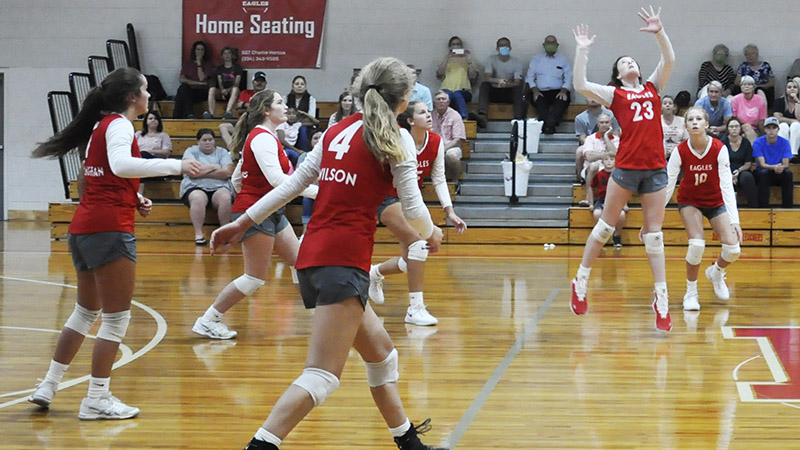 Pleasant Home checked in at the number four spot in Class 1A and opens the season in a tri-match Tuesday, August 23, at Straughn. The Lady Eagles will face Geneva at 5 p.m. and take on the Lady Tigers at 6 p.m. PHS will open its home portion of the schedule Tuesday, August 30, with a visit from area rival Kinston beginning at 4 p.m. The junior high and junior varsity teams will take the court prior to the varsity’s outing at 6 p.m.

Pleasant Home won the 1A Area 2 championship against Kinston and finished last season with a 19-7 record. The Eagles came up short against Bayshore Christian 3-0 in the second round of the South Super Regional at the Cramton Bowl Multiplex in Montgomery.

“The Lady Eagles varsity volleyball team is busy preparing for the upcoming season. Our team, which is made up of three seniors and seven juniors, is looking forward to hitting the court and working their way back to Birmingham by the season’s end with hopes of playing for a state championship. We are not strangers to playing in that venue but after last year’s second-round exit in the Super Regionals to Bayshore Christian, the ladies are ready to prove that they can compete on the championship level. We’ve been busy working on our rotations and figuring out who works best for us in those rotations. So far, things are looking good, and I expect we will be a little nervous when that first match rolls around. I also fully expect the ladies will keep themselves composed and do what we ask them to do day in and day out at practice. We are really looking forward to playing other teams; playing each other in practice tends to cause complacency, so we are very excited about getting the season started. We look forward to what the season holds for us and invite everyone to come out and support all the PHS Lady Eagles volleyball teams (junior high, junior varsity, and varsity),” Head Coach Tony Wilson said.

The complete 1A poll is as follows: