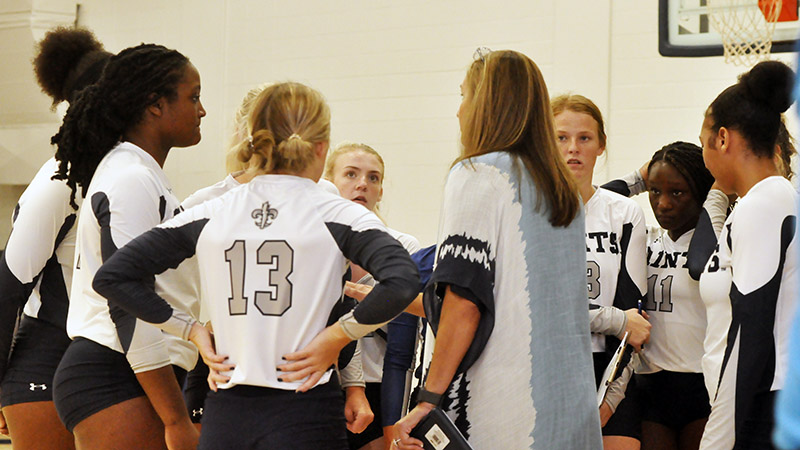 LBW Head Volleyball Coach Janie Wiggins talks to her team during a timeout in the Saints' home conference match against Coastal Alabama-South on Tuesday, August 23. (PHOTOS BY ZACK MAIO)

For the second straight time this season, the LBW volleyball team went the distance but fell 3-2 to Coastal Alabama-South in their home opener Tuesday night. 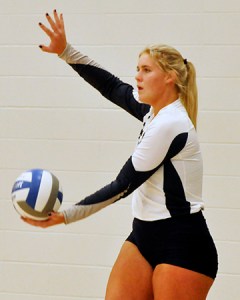 Sophomore Rhiannon Keck prepares to serve the ball to the Sun Chiefs during the first set.

“I am proud of the overall effort of the team. We have just got to learn to start off the match better. We were really close to taking that fourth set and not going into the fifth set. It’s early season, and this is a hard-working group. A lesson learned from this loss will encourage them to work harder to finish when the opportunity is there. They work hard to come from behind, and now we need to find a way to start out stronger,” said Head Coach Janie Wiggins.

SET 1 (CACC 25, LBW 22)
CACC came out of the gate strong and built an early 5-0 lead in the first set. Rhiannon Keck had a big kill as LBW fought back and cut the deficit to 9-3. After an 8-3 run took the lead to 17-6, Zationna Horne earned a kill for the Saints. The Sun Chiefs finished with another surge and took an early 1-0 lead in the match. 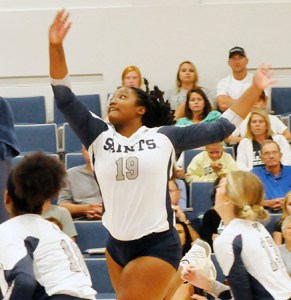 Sophomore Jaden Williams looks to make a big play for LBW in the second set.

SET 2 (LBW 25, CACC 12)
Maddie Rasmussen started the second set with four aces as Brianna Wilson and Jaden Williams had a block for a fast 7-0 start. Coastal-South trimmed the gap to 9-4 before a kill by Williams, and an ace from Ashton McCullar pushed the LBW margin to 11-4. Faith Peters made her presence felt with three kills and an ace as the Sun Chiefs remained fell behind by double digits at 19-9. Wilson blistered two more kills down the stretch to help the Saints even the match at 1-1.

SET 3 (LBW 25, CACC 13)
Both teams went back and forth in the third set as CACC took an 8-6 lead. Peters hit a booming kill, while kills by McCullar and Wilson gave LBW a 12-11 advantage. Rasmussen delivered two more aces, and two additional kills from McCullar made the lead 17-12. McCullar notched two aces in the final moments of the set before kills from Wilson and Williams gave the Saints a 2-1 lead in the match.

SET 4 (CACC 25, LBW 22)
The fourth set began with a long rally that went the way of the Saints. The Sun Chiefs responded in a big way and claimed an 8-3 lead. Williams broke the visiting run with a kill and cut the deficit to 8-4. Peters continued to shine with three kills during a big run and allowed LBW to draw even at 16-16. Williams and Peters then pushed the hosts to an 18-16 cushion. After the opposition responded and took the lead back, Keck and Peters kept the score within one. Coastal-South finished off the fourth set and forced a decisive fifth set. 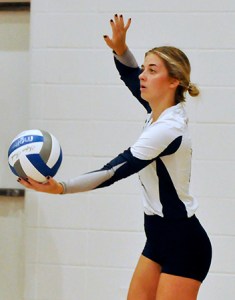 Sophomore Maddie Rasmussen lines up for the next serve on offense in the fourth set.

SET 5 (CACC 15, LBW 11)
It was a rough go from the onset in the fifth frame when CACC took an 8-0 advantage. LBW did not back down as kills from Rasmussen and Wilson helped whittle the deficit to 8-5. Two kills by Keck and another from Williams allowed the Saints to stay alive. The Sun Chiefs reached match point with a commanding 14-7 lead and held on. Peters and Rasmussen had a big block to bring the score to 14-11 before the final point concluded the long matinee.

The Saints will continue their three-match homestand Thursday, August 25, at 5 p.m. with a visit from Coastal Alabama East (0-2, 0-0 ACCC).