Opp looks to rebound against New Brockton in region opener 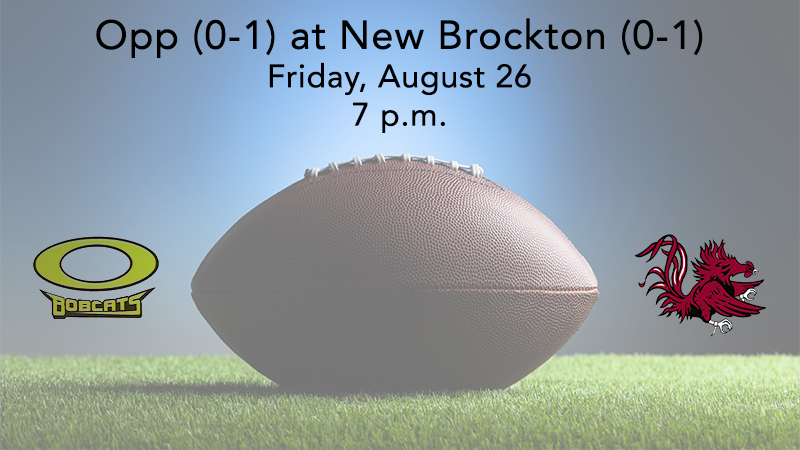 Following a tough rivalry loss, Opp (0-1) remains on the road and looks for its first win of the season in the region opener at New Brockton (0-1) Friday, August 26, at 7 p.m.

This will be the third meeting with the Gamecocks. The Bobcats won the first two.

Head Coach Mike Dubose said he didn’t feel Opp played as well in Week 0 as they had hoped, but the team did not throw in the towel. “I felt we competed and play hard. (Andalusia) got up to a pretty good lead on us and we had a chance to fold in that type of game, but didn’t. We are playing an awful lot of guys playing both ways. I thought they competed for 48 minutes and didn’t quit or give in against a really good, well-coached football team.”

The Bobcats will face a New Brockton team that has changed its offense and defense from a year ago.

“We don’t get a lot from the Elba-New Brockton game film from a defensive standpoint, so that concerns us a little bit. They have a new offensive coordinator (former Florala head coach Chris Littleton) and are doing things a little differently. They’re a very big and physical football team and have a big offensive line. They have a good plan, and we will have to get a lot of reps. It will be a challenge,” Dubose said.

The Bobcats have a goal to continue improving each week and finding ways to develop depth. “Some of our guys didn’t come off the field at all last week and started cramping. We have to find ways to work some players in there. One of our challenges right now is finding that depth,” he said.

Dubose added that A.J. Coleman and Zeb Green would both be out for a few weeks due to injuries sustained in the first game. “Other than that, we should have everybody else ready to go.”

Opp fell in its season opener at Andalusia last week, 35-7. New Brockton did not fare well in its first contest at home and was defeated by Elba, 40-8.