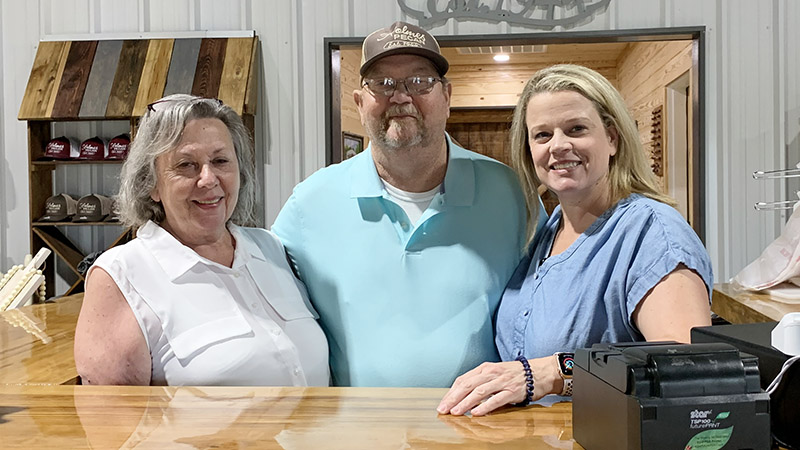 The new location of Holmes Pecan Company will open to the public Saturday. Pictured are owners Tony and Lynne Holmes with their daughter, Ashley Morgan. (PHOTO BY STEPHANIE SNODGRASS)

It’s a family affair, one could say.

In the small southern community of Andalusia, the “Pecan House” as it’s known around town will open its doors to its new retail and buying location on the South By-Pass on Saturday.

The day will mark the culmination of four generations of success with the opening of the 10,000-square foot facility. With its stained concrete floors and walls adorned with family photos of the company’s nearly 100-year history, the location also features the retail side visitors will surely enjoy. There, shelves are filled with all things pecan, from slices of homemade pies and other treats to the necessary items to serve one’s tasty delights. Visitors will also find a full line of gift items, such as candles and spices, as well as freezers stocked with local delights packaged for the grill and oven.

In the rear of the building, the tradition of buying and selling pecans will continue, said owner Tony Holmes, who along with his wife, Lynne, and children, Ashley Morgan and Brett Homes, handled the majority of the work at the new facility.

“We purchased the property back in 2015,” said Holmes, who also serves as the county’s District 3 Commissioner. “We knew we were going to do something, but we didn’t know what.”

It took six years for the plan to finalize, and ground broke June 2021. Holmes credits the dedication and skill of his children with the overall look of the property.

“We’ve done about 75 percent of the work ourselves,” he said. “Brett always said we did everything we knew how to do and a good number of things we didn’t know how to do. Ashley developed herself into a finishing carpenter over the past year and said if this new building doesn’t work out, she and I may go back into the construction business.”

In addition to his family, Holmes also credits “so many people” for “their help and advice along the way.”

“I won’t try to name them all because I will miss some, and I would never want to do that,” he said. “Just know we thank each of you that have helped us reach this point.”

Holmes said appreciation is just one of the many feelings he’s experienced during the journey.

“The other day, Lynne and I were standing around inside – it was just the two of us – and she said, ‘Well, are you happy?’

“And I couldn’t answer her; I could’ve never imagined way back then something like this,” he said motioning around the expanse. “To think we started with a little spot in Fairhope and then here in Andalusia to this…We’re just so blessed. Truly.”

Holmes Pecan Company began nearly 80 years ago by Holmes’ grandfather, Sampson Holmes, who discovered that buying pecans from the farm and then selling them at market was a way to help support his family. Along the same time, Holmes’ grandparents opened a general store or mercantile trading post in Covington County’s Stanley Community.

“Those meager beginnings led us to where we are today,” Holmes said.

It continues its operation of the buying site in Fairhope.

Daughter Ashley said for her, Saturday’s opening is like a dream come true and a long way from her start, working with her grandfather in 2006.

“In 2011, I bought over 1.1 million pounds of pecans while pregnant with my daughter, Ashlyn,” she said of working at the company’s East Watson location, which was expanded in 2020 to add more equipment and a few retail items.

“All of those things made me think I was doing great things,” she said. “And today, I am proud of the building but not because of the excitement of opening a store. I am proud of the time I was able to spend with Daddy building it. We were able to spend so much time together that I forgot we were working. We even wrote our names in the insulation, and I know it seems silly, but that building now has our names in it until it’s torn down. I had no idea at the time just how much that would mean to me today.”

Holmes Pecan Company, which is located across from the Covington Center Arena, will operate with the following schedule until the start of pecan buying season in October – Saturdays, 8 a.m.-4 p.m.; closed Sunday and Monday, and Tuesday through Friday, 10 a.m. to 6 p.m.

“I hope y’all come on out and see us,” Holmes said. “Daddy used to say, ‘We might not make a lot of money, but we sure make a lot of friends.’ I can’t wait to see all of my old friends and make some new ones in this location. I hope you will come take a look at how hard we have worked, hear some stories about the history we have placed inside the building, and you might even find yourself a snack.”