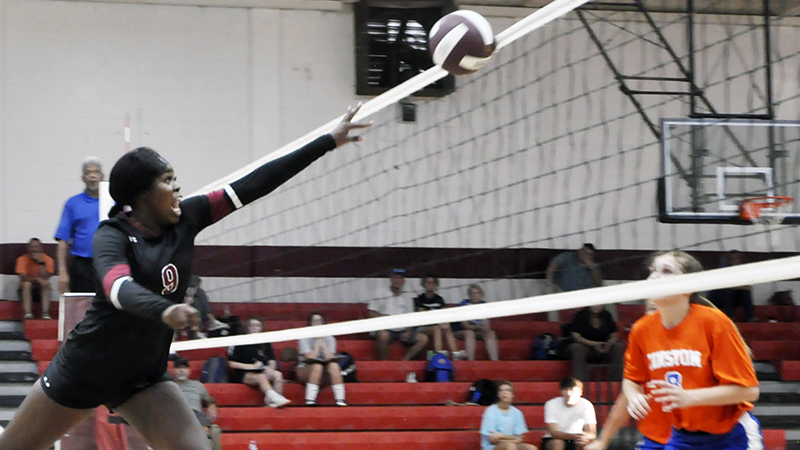 Zion Williams, left, goes airborne during a play at the net for Andalusia as a Kinston defender follows the play. (PHOTO BY ZACK MAIO)

Andalusia battled back from a slow start in the first set and defeated Kinston 3-1 in the team’s first home volleyball match of the season Monday. 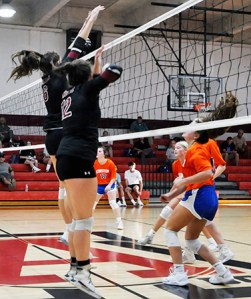 Cape Merrell, left, and Eliana Forry defend the net for the Bulldogs’ defense.

“We came out way too flat. They played much better in Opp, and I don’t know why they came out flat because we have some really great team chemistry this year. I am glad they don’t give up and play very methodically. That game we lost was a problem, but overall, they did hang together. Playing in this heat is a little bit different, but we practiced in it this summer. It’s a Monday, and I know they can play better than that. I expect a lot more out of them and am happy we won, but we have things to work on,” said Head Coach Angie Grimes.

SET 1 (Andalusia 25, Kinston 23)
Claire McReynolds had an ace during a strong start as Kinston opened the match on a 7-0 run. Zion Williams put Andalusia on the board with back-to-back kills, and Molly Capps trimmed the deficit to 7-4 with another kill. Ashland Kelley also had a pair of kills and brought the hosts within two at 10-8. The visitors then went on a 9-3 run with two aces from Aubrie Brown for a 19-11 lead. Capps, Kelley, and Williams all came up big during a 10-2 surge and tied the score at 21-21. Eliana Forry delivered an ace for set point and completed the comeback for Andalusia. 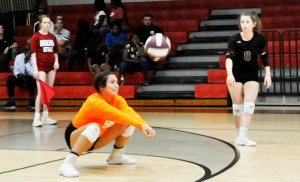 Olivia Mikel prepares to dig the ball for Andalusia on offense.

SET 2 (Kinston 25, Andalusia 20)
McKinley Gibson executed an ace and helped Kinston take an early 4-1 lead in set two. Forry followed suit as Andalusia cut the margin to 6-4. After Cameran Whigham hit back-to-back aces for a 10-5 lead, Williams notched two kills for the host Bulldogs and made the score 11-8. Another kill from Williams and three consecutive aces by Capps answered a 6-0 visiting run and closed the gap to 17-12. Kelley continued to shine with three more kills as Andalusia fought within five at 20-15. Brown earned an ace for the final point of the frame, and Kinston evened the match at one set apiece.

SET 3 (Andalusia 25, Kinston 16)
Danielle Cain gave the visitors a 4-0 advantage in the third set with a block before Cape Merrell drew the hosts even at 8-8 with a kill. Olivia Mikel then picked up two aces for an 11-8 lead. Kinston made the score 15-12 but was unable to draw any closer for the rest of the set. Kelley had an ace for a 16-12 margin until two vicious kills by Williams upped the lead to 23-14. Andalusia took a 2-1 lead in the match with the final point.

SET 4 (Andalusia 25, Kinston 18)
Williams scored the first point of set four with a kill and added a second one for a 3-2 lead. Capps and Mikel combined for three aces and propelled Andalusia to a 9-3 advantage. Cain delivered an ace as Kinston sliced the deficit to 11-5. Forry added a kill and an ace for a 13-8 lead before two straight aces by Madison Lolley took the score to 15-13. Ciara White had two aces along with a kill by Capps during an 8-3 run and put the host Bulldogs in a 23-16 lead. The visiting Bulldogs refused to go away until Williams hit a booming kill and closed out the match. 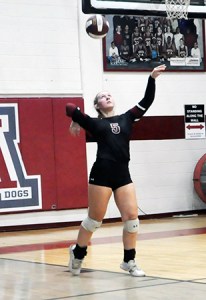 Sarah Beth Grimes focuses on the ball during a serve in Andalusia’s home opener against Kinston on Monday.

Williams and Kelley paced the Lady Bulldogs with 12 and 10 kills, respectively. Capps led the charge with seven aces and was followed by Forry at four and Mikel at three. Merrell added two digs, while Sarah Beth Grimes collected 22 assists in the win.

Andalusia returns to the court Tuesday, August 30, at Goshen and begins area play Thursday, Sept. 1 at home against Dale County.