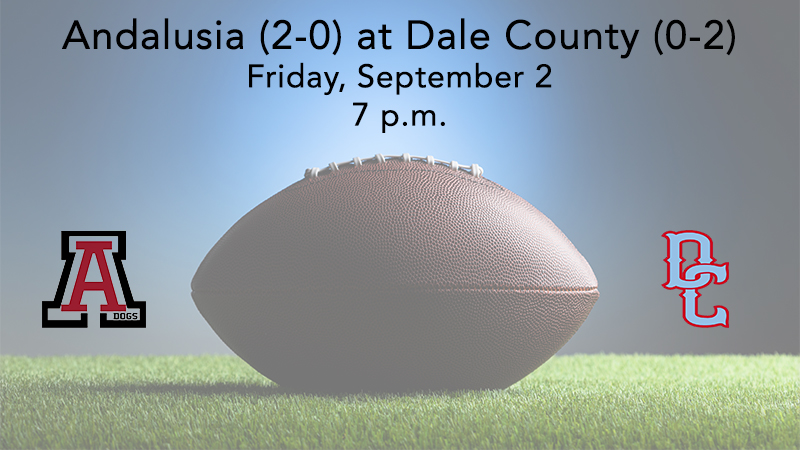 Coming off wins over two quality opponents, Andalusia (2-0) looks to begin region play with a win at Dale County (0-2) Friday, Sept. 2 at 7 p.m.

The teams meet for the first time since 1997 in their seventh matchup as the Bulldogs have a 4-2 series lead over the Warriors.

“We are back on the road. I’m sure Coach (Luke) Tucker is doing a great job, and their kids will be excited about their first home game. Their stadium is really unique, and we look forward to going to play over there. It’s a region game and gets us into what counts for the playoffs. I expect us to have a really good week of practice. There is still a lot of room for improvement and things to get better at,” Head Coach Trent Taylor said.

Taylor added that it was a challenge playing Milton who had a really good football team. “There is no doubt they have some really special athletes. The wide receiver committed to Georgia is everything he is advertised to be and a tremendous athlete who will do well at the next level. The quarterback was much bigger in person than he looked on film and will also do well.”

He was proud of the Bulldogs for making the plays they needed to make.

“Defensively, it was apparent early on we weren’t going to pitch a shutout. I think our special teams played well, and we ran a kickoff back for a touchdown. Our coverage was good in some pretty turbulent situations considering the amount of rain they had gotten. We were able to do some things offensively in the passing game, which in turn opened up some things in the run game. I thought our guys did a really good job being on the road, and it was a big win.”