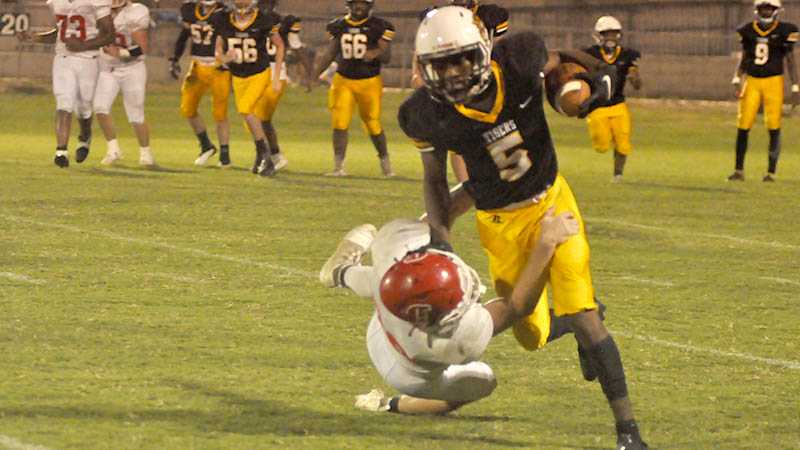 Red Level’s Malikye Wright, right, breaks away from a Pleasant Home defender during a rushing play in the Tigers’ region win over the Eagles Friday night. (PHOTO BY ZACK MAIO)

Red Level celebrated its senior night with a complete-game effort on both ends of the ball and handed Pleasant Home its first loss of the season Friday night.

According to Head Coach Kenny Skipper, Red Level (1-1, 1-1 1A Region 2) had a complete game performance.

“We had a lot of mental breakdowns and some bad penalties last week. We weren’t focused and stressed that all week with our guys. We told them to play for 48 minutes and between the whistles, and good things would happen. Other than one play in the second half where we missed some tackles, the defense played lights out. It was tight at halftime, but we imposed our will on them in the second half. I was proud of them for playing a lot more physical, and we did a lot of good things,” Skipper said.

The Eagles began the game on offense but were forced to punt after a three and out. The Tigers took over in visiting territory and marched downfield. Javen Poindexter hit Malikye Wright for an 11-yard strike to the opposing 23. Micah Wright then had a 9-yard-run and picked up another first down with a 2-yard scamper. Five plays later, Poindexter scored from one yard out, and Tony Veasey added the PAT. Red Level took a 7-0 lead with 5:42 left in the opening quarter. Ty Clark returned the ensuing kickoff for 27 yards but fumbled the ball into the hands of Tracy Coxwell.

Micah Wright opened the next drive with a 22-yard run as a penalty moved the ball to the 14. Poindexter then had a 7-yard run before Zanmeyon Calloway scored a 7-yard touchdown run. Veasey was true on the PAT for a 14-0 lead with 4:01 left in the first. Josh Hawkins returned the kickoff 15 yards to the Pleasant Home 35. Mason Anderson converted a third down with a 13-yard run across midfield. Red Level held on defense and forced a punt at the end of the first quarter.

After forcing a punt to begin the second quarter, Anderson put the Eagles on the board with a 56-yard touchdown run. The PAT was blocked and kept the score 14-6 with 8:42 left until halftime. The Tigers reached the opposing 15-yard line but turned the ball over on downs. Hawkins and Anderson earned two first downs on the next drive before an incomplete pass on the final play of the half.

Malikye Wright opened the second half with a huge kickoff return to the visiting 20. Pleasant Home (1-1, 0-1) stood firm defensively, but another fumble recovered by Brody Ingram gave Red Level the ball back. Poindexter threw a 14-yard touchdown pass to Malikye Wright for a 20-6 lead. The Eagles followed with a six-minute drive but could not score as the action shifted to the fourth quarter.

Poindexter converted a fourth-and-goal with a 3-yard touchdown pass to Malikye Wright. The PAT failed and kept the score 26-6 with 10:27 to go in the game. Following a big kickoff return from Christian Peek, Pleasant Home had one first down but was stymied again by the Red Level defense. Jacob Bryan gashed 20 yards on three runs for the Eagles down the stretch before Red Level went into victory formation.