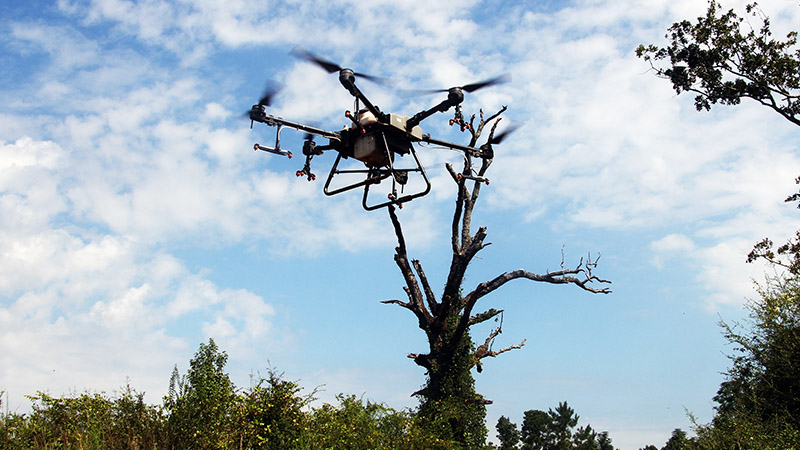 A six-arm drone with two spray nozzles underneath each arm sprays herbicides from approximately 20 feet in the air to vegetation in a Covington County field. The land and field are owned by Alfred and Lacreshia Whitaker at Whitaker Estate in River Falls. (PHOTO BY ZACK MAIO)

A drone has been preparing a Covington County field in River Falls with herbicide spray to prepare a site to be replanted with Longleaf pine trees.

“What we are essentially doing is spraying all the existing vegetation to kill it for the species we want out here, which is the Longleaf pine. In this industry around here, there are typically three ways to do it. One is ground dismounted, which is with the backpack sprayer who has a 4-gallon backpack. There will be a 10 to 20-man crew walking across the land to spray herbicide directly on foot. You can have a mounted ground spray, which is a vehicle usually a skidder with a massive tank on it driving across and spraying it. There is also aerial, which is done with a helicopter like a crop duster in agriculture. Of the three, aerial is the most economic option, but the cost of the helicopter and fuel is high. The small landowner is denied that aerial opportunity unless he is right next door to one of these timber management companies and can tie in while they’re spraying.”

The drone offers the economy of a helicopter but on a much smaller scale.

“We are spraying four properties in Covington County today and tomorrow. They total about 250 acres with the largest here consisting of about 140 acres. The smallest is on Oglesby Road in Red Level and is about 20 acres. Last year, you could never think about spraying 20 acres from the air unless they bordered a large timber management company that happened to be doing it at the same time,” Loflin said.

Another advantage of using the drone is that it does not have an amount of drift like a helicopter.

“If you’ve ever stood underneath a helicopter, you know it kicks off on a whole lot of wind. When they are flying around a boundary line, they don’t want to drop that chemical on the neighbor because it will kill the neighbors’ trees or crops. They leave a buffer strip, which is okay when you’re spraying a 1,000-acre block. A 40-foot buffer strip doesn’t take up that much percentage when you’re talking about that scale. For the small landowner, that’s a significant percentage of his land not being sprayed. This drone flies at 20 feet and has almost no drift. They can spray right up to the boundary line with it.”

The drone carries a massive difference instead of the helicopter.

“It’s like night and day. You’re getting into double-digit cost from this to the ground backpack spray. That is very significant for the private landowner who doesn’t have the funds like industrial timber does. Timber ranks in the top three or five industries in the state and is a massive industry in Covington County driven by private landowners,” he said.

According to Loflin, 90 percent of Alabama’s forests are being grown on landowners’ farms. “That drives a timber industry second in the country only to Georgia. This is going to be a game changer. As far as I know, this is the first site prep of its kind that has been sprayed from a drone in Covington County. This is like the first tractor to show up to plow a field, and everybody is still plowing mules.”

Drone technology will eventually change the way forestry is logged in the future.

“They have to have a 20-foot clearance with no standing trees for them to fly. When this starts making its way into the industry, it’s going to change how logging is done. It will change the way places are replanted. Places that weren’t unable to be sprayed before will now get to be sprayed. It will make it more economical for the private landowner,” Loflin stated.