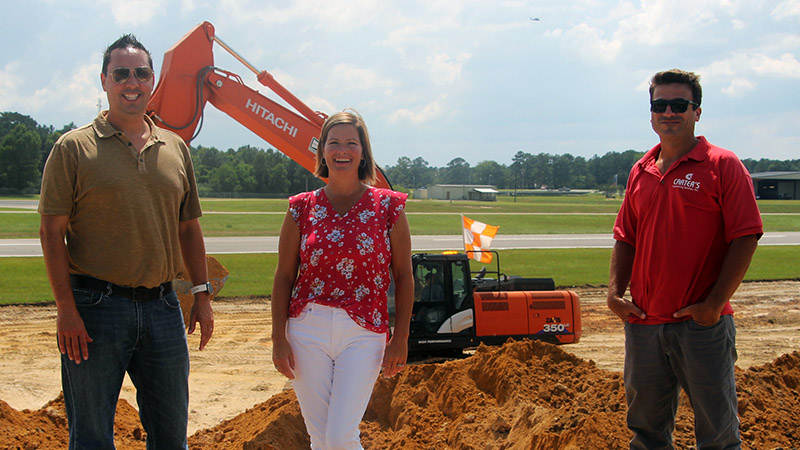 The South Alabama Regional Airport will expand its runway safety area from 100 to 250 feet following the completion of an ongoing expansion project scheduled to be finished next month.

Grading, drainage, clearing, and erosion control will be among the improvements within the runway safety area (RSA) for Runways 11 and 29.

“With safety always being our top priority, this has been a project that we’ve been wanting to do for nearly 10 years. Because other priorities arose, it’s been pushed behind. We’re grateful to be able to perform this project because in the event of an aircraft for any reason coming off the runway, the area will be object free and will hopefully eliminate any potential damage to an aircraft,” SARA Executive Director Jed Blackwell said.

Blackwell added that the project began on July 11 this year and is a 90-day project expected to be completed by Oct. 9.

“The project advertised nationwide and bid on Feb. 22 of this year. Carter’s Contracting Services in Andalusia was the responsive low bid in the amount of $1,695,088.57. Carter’s Contracting Services was awarded the contract on June 15. The project is funded by a 100 percent Federal Aviation Administration (FAA) Airport Improvement Grant that was announced by Senator Richard Shelby in September 2021.”

Many different organizations have played a critical role in the project.

“The funding and final oversight are from the Federal Aviation Administration. From the state level, our Alabama Department of Transportation Aeronautics Bureau provides very needed support along with inspection of our facility annually in all areas. They also participate in matching most grants from the FAA. In this instance, FAA is paying 100 percent of the grant. However, in most cases, ALDOT will match five percent of grants. Our engineering firm for this project is Goodwyn, Mills and Cawood located in Andalusia. Our lead engineer is Mrs. Michelle Conway. Carter’s Contracting Services is the contractor and led by Mr. Austin and Hank Carter,” he said.

The extended runway will have an immediate impact on the airport and local community.

“Runway Safety Area improvement is not something that is very eye-catching like new lighting, sealcoats, or fuel farms. However, it is very necessary. In the event of an aircraft emergency, having this area cleared, level, and easy to travel for emergency vehicles is a key component of airport safety. Our airport can accommodate aircraft as small as Cessna 150s and up to Boeing 777s and Lockheed C-130s.”

Blackwell said the airport will benefit greatly from the project. “We hope we never have an accident that would require usage of the runway safety area. However, proper safety is always our top priority. This will allow the area 250 feet from the center of our runway to be clear and object-free.”

Michelle Conway, an engineer with Goodwyn, Mills and Cawood, is the project manager for all the airport’s projects.

“Larger aircraft will be able to now safely land at the airport, which can bring in larger businesses. It will expand the opportunities for future growth in businesses and therefore create jobs for the surrounding areas of the county. Because of the expansion of the runway and safety areas, more businesses will fly in to look at the opportunities to bring their company. This will in turn give the local community jobs the airport has been working towards,” she said.

Blackwell stated that the South Alabama Regional Airport consistently ranks among the top airports in the state.

“With over 85,000 operations per year, it is one of the busiest general aviation airports in Alabama. From economic growth to its successful military fuel sales operation to its delicious Blade ‘N’ Wing café, SARA offers opportunities in some way to everyone in our community.”

“I wear a lot of hats, and this is the first time I’ve worked in Covington County in 20 years. It’s a big deal for me to work right here at home and be part of incremental expansion that is ongoing in the area. We’re pretty much self-performing everything out here except for a little bit of asphalt that is going into place. Otherwise, everything around here will be in-house,” he said.