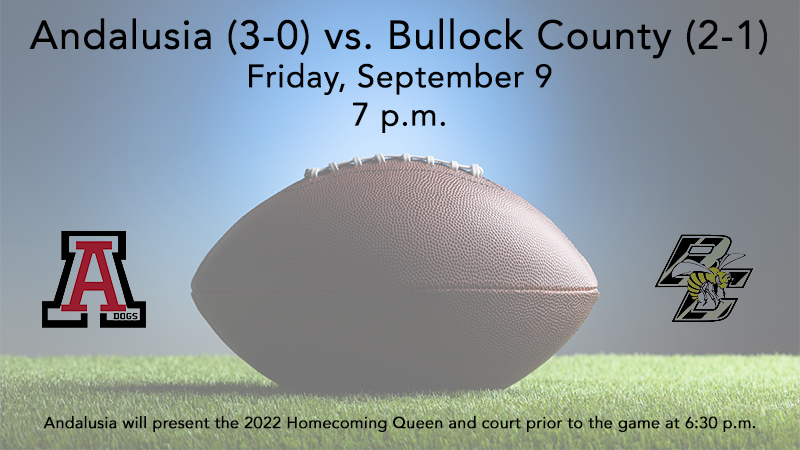 The two schools square off for the eighth time on the gridiron. The Bulldogs have never lost to the Hornets and hold a 7-0 record all-time dating back to 1975.

“Bullock County is a very athletic team with some guys who can run. They spread it out and seem to be a lot more organized than they have been in the past. They’re doing a good job offensively and mix the run and pass really well. Defensively, when you have guys that can run like they can, it’s always scary. They can make up for a lot of mistakes with their speed,” Head Coach Trent Taylor said.

The Homecoming Queen and court will be presented in a ceremony prior to the game.

“No high school does homecoming quite like Andalusia does. It will be a busy week leading up to the game Friday with a lot of visitors on campus. Andalusia always has a lot of alumni come back. Our guys know they have one job, and that is to win the football game,” he said.

Taylor added that he was pleased with the win at Dale County.

“Any win is a good one, but there’s always room for improvement. I was proud of our kids. We talked to them all week long that it’s not about the opponent, but it’s about us. We just have to make sure we take care of Andalusia. I think we did a really good job of that.”

The win allowed the Bulldogs to play their second and third string teams. “We did what we needed to early on and controlled the game. I was really proud of our young guys who got to play the second half. Those guys have worked really hard as well and were able to get some quality minutes,” Taylor said.

Both teams opened region play last week when Andalusia shutout Dale County, 43-0, and Bullock County fell to Montgomery Academy, 34-0. The Bulldogs earned a 38-16 win over the Hornets last time the teams met in 2015.