Bobcats hope for leg up on Providence Christian 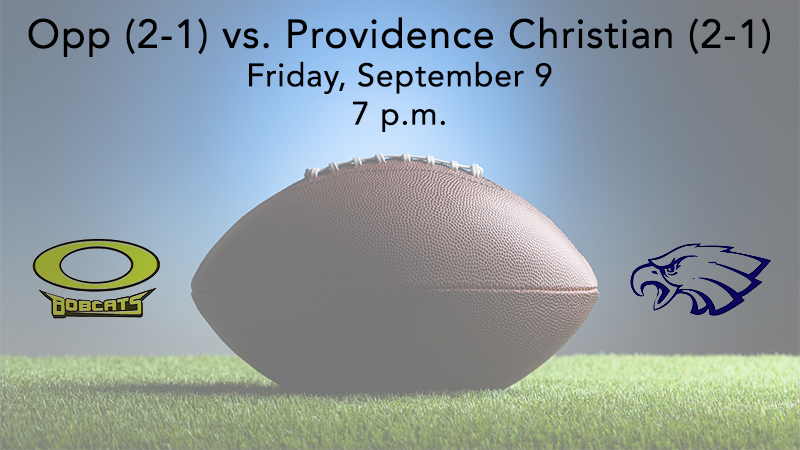 This year marks the seventh straight year the teams have met. The Bobcats have won the last two games over the Eagles and hold a 4-2 series lead since 2016.

“We have a big challenge but also a big opportunity with Providence Christian this week. Most of their guys are back from last year, and they’re a physical football team. Kenny Keith and all of his staff do a great job coaching them, and their kids play hard. We struggled against them last year over there. They do some things very well as far as the Wing-T formation and power running concepts. Providence Christian is by far the best team we’ve played with the exception of Andalusia,” Head Coach Mike Dubose said.

According to Dubose, Opp is still missing some players due to injuries. “One of our backup linemen was hurt on extra point and field goal protection, and I don’t know about his status yet. A.C. Hightower has a shoulder injury, and we’re trying to decide what the best method for him is at this particular time. Other than that, we will have everybody else.”

Although the Bobcats have defeated their last two region opponents by a combined 51 points, they understand there is still room for improvement.

“We made some big plays and scored some points but did not play as well as I would have hoped. We had a lot of mistakes and two or three personal foul penalties, which I was disappointed in. We were able to get a lot of young guys in the game again, and that part was good. To play at home and get a win is always good, so I was excited for that, but if I can be honest, I’d like for us to be playing a little bit better than we’re playing,” Dubose said.

Opp defeated Providence Christian on the road in 2021, 41-18. The Bobcats routed Northside Methodist last week, 40-10, while the Eagles earned a home win over New Brockton, 27-6.