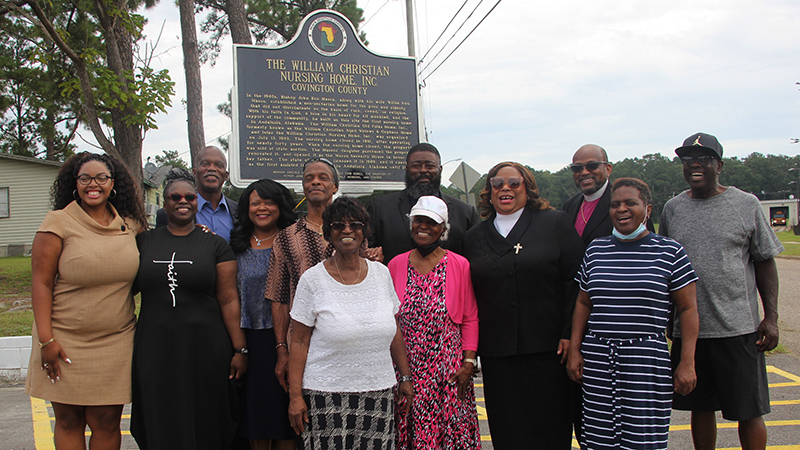 Descendants of the late J.B. Mason were on hand to celebrate an unveiling of a historical marker in his honor Wednesday. Mason was responsible for establishing the first nursing home in Andalusia in July 1949. (PHOTOS BY ZACK MAIO)

Community members gathered for a ceremony Wednesday to unveil a historical marker in honor of the William Christian Nursing Home, the first nursing home built and established in Andalusia.

The historical marker event joined many historical events in Covington County and surrounding counties but was the first to honor black history achievements in Andalusia.

“It is an honor for me to be here on this historic occasion to honor and unveil this marker in the memory and honor of J.B. Mason. Brother Mason worked hard to get this nursing home done and involved many people in the community. Mason had a vision and willpower to put that vision into reality, and that’s what he did with this nursing home,” City of Andalusia Mayor Earl Johnson said.

The first state-licensed nursing home facility was initially called the William Christian Old Folks Home. It provided care for the poor and elderly citizens who needed care and also brought jobs to the community. At the time, there were no Medicaid or Medicare to help the elderly in need. Mason solicited funds from the community to build the nursing home and also had help from volunteers. 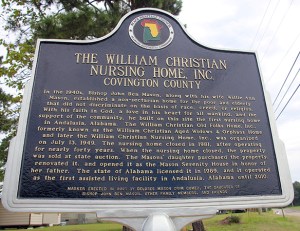 A close-up photo of the historical marker unveiled Wednesday.

A 10-room facility was built and went into operation on July 13, 1949. So many elderly citizens were requesting an application to the home that a waiting list had to be formed. Another drive soliciting funds from the community proved to be successful. Those funds allowed for a 35-bed addition to the facility to accommodate more patients. The nursing home closed in 1981 after nearly 40 years.

The property was eventually sold at state auction when it closed. Mason’s daughter Delores Mason Crim Gomez purchased the property, renovated it, and opened what became known as the Mason Serenity House in honor of her late father. The State of Alabama licensed the facility in 1989, and it operated as the first assisted living facility in Andalusia until 2010.

“I’m glad everyone came out today and attended this wonderful occasion. I thank God for Andalusia coming out to celebrate this historical marker. Andalusia is a place my father loved and had visions, so this is for him,” Gomez said.

“We thank the Lord for this day He has given us and thank everyone who came out to celebrate with us. My sister Delores’ vision to have this historical marker was completed today in memory of my father and mother. We are surrounded by love,” Green said.

The property, located at 601 Henderson Street, was demolished in 2019 and is now used for Andalusia High School parking. This is where the historical marker was erected.

“I hope this historical marker will be a memorial to Bishop Mason and also a catalyst for people to tell their stories related to Mason Serenity House and this neighborhood. I hope this will prompt to tell and preferably write down those stories, so they can be preserved,” Dr. Steve Hubbard said.

Church of the Living God Andalusia Pastor Anthony Gaskill was happy the vision became reality and the historical marker could be erected.

“It was a long struggle for Delores, but I’m thankful she was able to accomplish what she set out to do. It was her dream, and I see the relief now,” Gaskill said.

There were a total of 45 donors who supported and helped purchase the J.B. Mason Historical Marker.