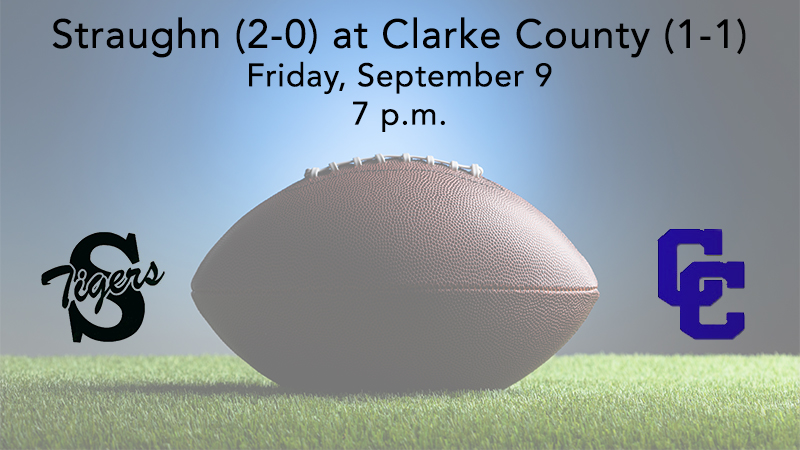 This year’s contest marks the third overall meeting of the two teams who faced off in 2002 and 2003. Although the Tigers have a 2-0 lead in the series, the Bulldogs have lost by nine and 10 points in the two matchups.

“Clarke County is the defending 2A state champion. They will be extremely well-coached, very fast, and physical. We will have to be ready to play. Playing a good team like Clarke County only makes you better. I fully expect this experience to help us down the road,” Head Coach Ashley Kilcrease said.

According to Kilcrease, the Tigers are planning to go with the same approach for this game as the previous two. “We are preparing as if this is a region game. In the case of a tie in the final region standings, non-region games are used, so this could come into play down the road.”

Straughn’s strong performance last week gave players on the bench an opportunity to take the field.

“We challenged our guys all week to come out fast early, and we did. Micah Turner made some big plays early with a forced fumble, two blocked punts, and a touchdown reception, all in the first half. Special teams were big in the first half. Mack McIntyre also returned a kickoff for a score in the first half. We were able to play a lot of young guys in the second half, so overall, it was a really good night,” he said.

Both teams earned home routs over their respective region foes last time out. Straughn surged to a 45-12 win over Daleville, while Clarke County pitched a 46-0 shutout against Washington County. The Tigers defeated the Bulldogs during the 2003 season in their last meeting, 24-14.