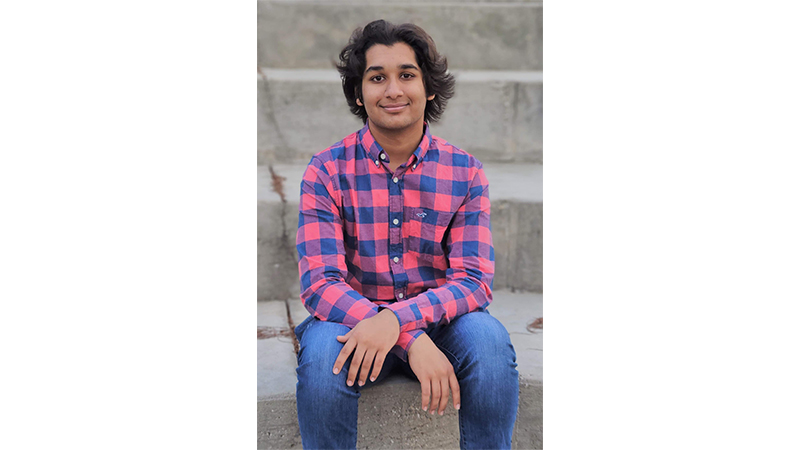 “I found out about this honor when I received an email from College Board stating I had received national recognition. I was ecstatic when I first received the news. I find it as a big accomplishment in my life to have received this award. Many sacrifices that I have made throughout my life have led to this moment and have paid off for me,” Patel said.

“You’ve accomplished milestones that will help pave the way for your success in college and all that’s beyond. We know your time in high school has been full of demanding moments, disruptions, and challenges. Through it all, as your achievements show, you’ve demonstrated resilience and an unwavering commitment to claiming your future. You’ve put in the effort and your future is bright. We’re proud to honor you as part of the College Board National Recognition Programs and celebrate your success and brightness of all that’s ahead,” a College Board statement to Patel read.

A member of the top 10 of his senior class, he will have completed 28 college credit hours following his graduation next spring. Patel also took the ACT and scored a 34 out of a possible 36.

“I am grateful for my academic success because it would give me the opportunity to enter adulthood debt-free. Being a student at Straughn High School has prepared me well for the future. I have acquired social skills that I would have not obtained at other high schools in this area. Straughn is also one of the best schools in the county academically.”

While Patel is unsure where he wants to further his education, he is clear on the path he wants to follow. “I am currently debating on where I would like to attend college but am leaning towards the University of Alabama at Birmingham. I am planning on majoring in neuroscience with hopes of becoming a neurosurgeon. UAB seems to be the best fit for that currently; however, other schools have not been cast out of my list yet,” he said.

He added that he has always wanted to be in a position of helping people since he was young.

“If this is the career I end up pursuing, I would definitely be helping people and saving lives. I look forward to meeting new people, expanding horizons, and obtaining the career of my choice in the future. My parents have been the most influential figures in my life because they always had the best interests for me and have pushed me to strive for my goals.”

He is the son of Neil and Binita Patel and will graduate from Straughn High School on May 26, 2023. His younger brother, Dhilan Patel, is a seventh grade student at Straughn Middle School.

“Ever since he was in diapers, we have wanted him to be the best that he could be to better society. From his academics to his leadership positions, he couldn’t have made us more proud. We are proud that our son is graduating from Straughn, as I’m an alumnus of Straughn as well. We would love to ask other parents how they would raise their child if they were gifted and talented as Taj is. It is not as easy as it seems to raise a very intelligent child. That being said, we do wish all parents the best in pursuing their goals with their children,” Patel’s parents Neil and Binita said.