Bobcats hold on for hard-fought win over Providence Christian, 20-14 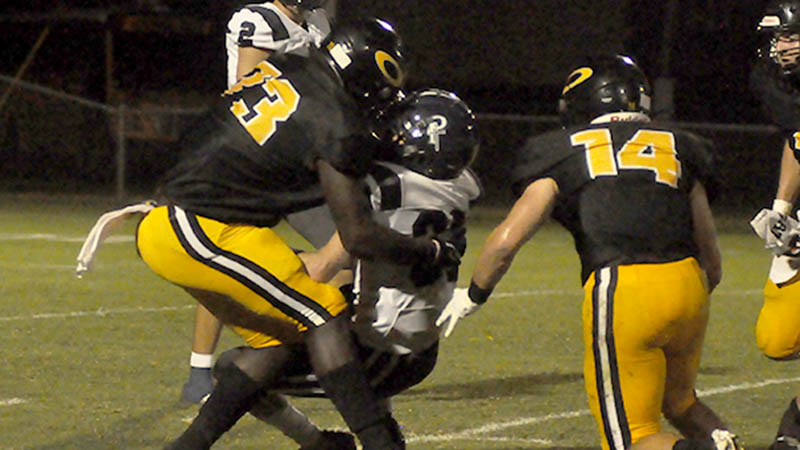 Opp’s Javion Stoudemire, left, brings down the Providence Quarterback for a sack as Nelson Hall prepares to assist on the play. (PHOTOS BY ZACK MAIO)

Opp built a three-touchdown lead in the third quarter and withstood a late surge from Providence Christian for a 20-14 region win at home Friday night.

Providence started on offense but quickly went three and out. Opp only needed two plays for the first score. Gray Jennings threw an 11-yard pass to Robbie Gafford for a first down to the visiting 44. Jennings found Zeb Green open around the left side for a 44-yard touchdown pass. The PAT was no good and left the score 6-0 with 9:05 to go in the opening quarter.

The Eagles managed one first down on an 11-yard run but coughed up the ball as A.C. Hightower recovered a fumble. The Bobcats were unable to take advantage and punted back. After another defensive stand, Opp got a 32-yard run from Jennings before a 7-yard pass to Gafford inside the red zone. Providence made a fourth down stop, as the score remained 6-0 at the end of the first quarter.

The defenses kept shining and forcing stops before a turnover turned into gold for the Bobcats. A.J. Coleman returned an interception 30 yards to the opposing 3-yard-line. Terry Davis followed with a 3-yard touchdown run, and Prent Huggins added the PAT for a 13-0 lead with 6:31 left until halftime. The Eagles continued to stall offensively and had to punt back to the hosts. Following a first down run by Davis, the opposing quarterback threw an interception. Providence finally worked its offense to the tune of some first downs. DaDa Stoudemire delivered a huge sack on the final play of the half for Opp. 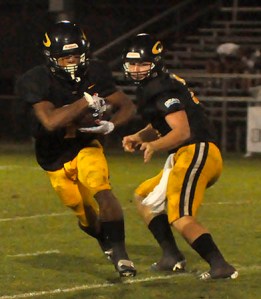 Terry Davis, left, takes a handoff from the Bobcats from quarterback Gray Jennings in Opp’s 20-14 region win over Providence Christian.

The Bobcats (3-1, 3-0 3A Region 2) began the second half with an onside kick recovery. After a big run by Jennings on the first play, Davis scored two plays later on a 2-yard touchdown run. Huggins was true on the point after for a 20-0 lead with 8:57 to go in the third. The Eagles (2-2, 2-1) were stymied on defense again, but so were the hosts on their next drive.

Providence finally broke through with a 21-yard touchdown pass and trimmed its deficit with a 21-yard touchdown pass. The PAT was true and made the score 20-7 with 3:26 to go in the third. Opp moved the ball on its next possession before another fumble turned the ball over. The visiting quarterback needed only one play and an 80-yard strike to bring the opposition within 20-14 after three quarters.

Neither side could break through with any points in the final quarter. Both teams threw several incomplete passes until the final moments. The Eagles had one final hope, but Gafford sealed the win with an interception for the Bobcats.

Jennings went 8-of-22 with 160 yards passing and also had 12 carries for 58 yards. Davis added three receptions for 65 yards and 49 rushing yards with a touchdown, while Green caught one touchdown pass for 48 yards. Colby Ballard and Jennings paced the defense with 10 tackles each. Nelson Hall added eight tackles, as DaDa and Javion Stoudemire both picked up a sack.

Author’s Note: Tripp Norris contributed to this story with stats.