Eagles use strong running game for region win at McKenzie, 25-20 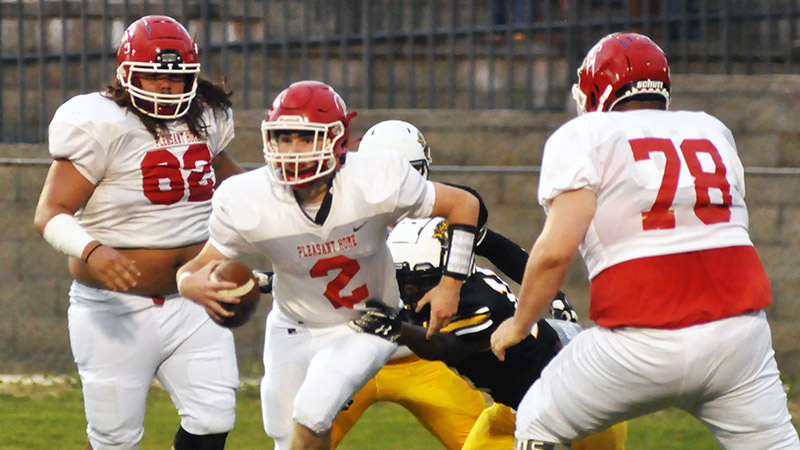 Mason Anderson, center, looks to break away from a defender in a previous game. Anderson finished with four touchdowns and helped lead Pleasant Home to a 25-20 region win at McKenzie on Thursday, Sept. 8. (PHOTO BY ZACK MAIO)

Mason Anderson had four touchdowns as Pleasant Home rallied from an early deficit and topped McKenzie 25-20 on the road in a big region contest Thursday night.

“We are so proud of the effort and resilience of our players. It was a hard-fought physical game by both teams. We had some game-defining plays by a couple of our key players who stepped up when it mattered the most. We wanted to improve on our turnovers and penalties and did that tonight. We had a number of guys who were injured, and they pushed through tonight for us. We know we still have a long tough road ahead and will continue to strive for improvement,” Head Coach Cody Sellers said.

The Tigers began the game on offense and scored first on a fourth-down conversion. Jayen McMillian threw a 54-yard touchdown pass to Jahmarren Jackson. The two-point conversion was good for an 8-0 lead with 9:39 left in the first quarter. The Eagles went three-and-out on their first possession but retained possession when Luke Gatewood recovered a fumble on defense.

Anderson had a 17-yard pass to Ty Clark as Pleasant Home (2-1, 1-1 1A Region 2) went inside the red zone. McKenzie (0-3, 0-3) fought back and made a fourth down stop, as the score remained 8-0 after the first quarter. Anderson began the second quarter with a huge third-down conversion. Josh Hawkins kept the drive alive on fourth down with a 3-yard run. Anderson capped a 16-play, 7:30 drive with a 4-yard touchdown run and put the Eagles on the scoreboard. The two-point try failed, but the score was 8-6 with 5:45 left in the half.

The Tigers responded back with a touchdown in the final two minutes and extended their lead to 14-6. Pleasant Home had the final say of the half with a quick but effective drive. Anderson had a 19-yard touchdown run, but another conversion fell short and made the score 14-12 at halftime.

The two teams traded punts on their first possessions of the second half. Starting at the 4-yard-line, Anderson delivered in the clutch with a big 87-yard run and gave the Eagles their first lead with a 9-yard touchdown. The PAT was no good and left the score 18-14 with 5:09 to go in the third quarter. McKenzie was poised to answer on its drive and made it inside the red zone before Clark forced a fumble. Hawkins earned 19 yards on two rushes before the third quarter ended.

Pleasant Home moved the chains twice and then converted another third down when Anderson hit Clark in stride for a 34-yard touchdown. Anderson booted the PAT for a 25-14 lead with 8:30 remaining in the game. McKenzie then used a 10-play, 4:18 drive and cut the deficit to 25-20 with a 1-yard touchdown run by McMillian. The Eagles were able to pick up a first down on their next drive but had to punt with 22 seconds left. The Tigers were stopped on fourth down as the game concluded.

Pleasant Home outgained McKenzie in total offense, 354-352. Anderson was 8-of-11 passing with 124 yards and 152 rushing yards on 19 carries. Hawkins added 78 rushing yards in the win. Clark had 51 receiving yards and was followed by Gatewood who had 36 in the air.