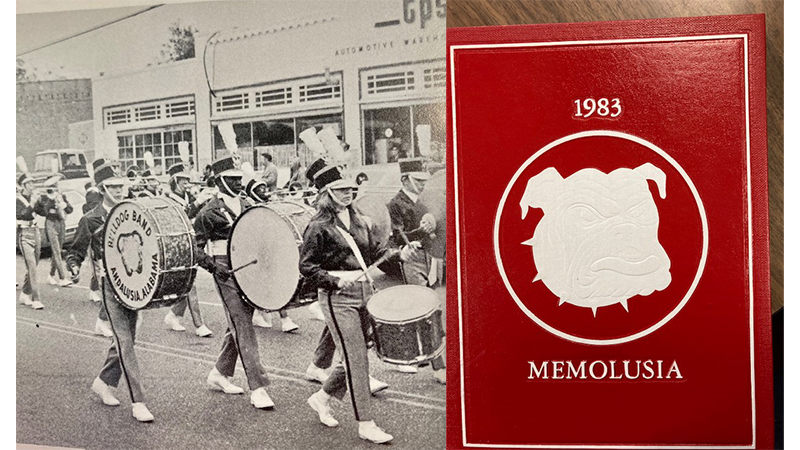 At Homecoming 2022-23, this year at Andalusia High School, the graduation classes of the three’s are being honored and celebrated based on the years students were graduated in 1953, 1963, 1973, 1983, 1993, 2003, and 2013. As I was perusing Memolusia annuals in the Heritage Room recently, I ran across some information featured in the 1983 yearbook. Let me share some stories about “Caton’s Cabin,” a popular place for students to gather.

In 1983 it was noted that “Caton’s Cabin” was built 30 years ago (That would have been in the 1950s) by Lois and James Caton. Their cattle farm located off the Brooklyn Road which consisted of approximately 99 acres was appropriately named “99 Acres.” The cabin was constructed of pine wood with a tin roof. The lumber in the cabin was cut and sawed from trees that were cut off the farm. There was a massive fireplace which was the focal point. There was a kitchen, a sleeping porch, and large windows with a scenic view of the pond which had been dug in 1950. A pool table stood in the large living entertainment area.

The cabin was used for parties of all kinds, both business and pleasure. In fact, any excuse to have a party was good enough. Jimmy and Jerry Caton were the sons of Lois and James, but the tradition of this destination moved on to the grandchildren stated Cindy Caton Studstill, daughter of Patricia (nee Evers) and Jimmy Caton.

Cindy Caton Studstill remembered, “The cabin was used by my brothers, Jimbo, Greg, and Todd, for various kinds of parties. I only had one big party,” she stated in 1983, “but I intended to carry on the tradition of the cabin to the best of my ability!”

The name “99 Acres” came from the cattle brand. It is remembered by Caton descendants that when the Catons hosted a party, the hosts would heat up the branding iron and brand the wall which was made of ponderosa pine. Everyone who attended the party would sign their name around that particular brand and date it. That would be a way of record keeping of who attended the party and when.

Cindy remembers seeing her grandparents signatures on the wall along their friends including the legendary Solon and Ellie Dixon.

She recalls, “Every Friday night after an AHS home football game, there was a party. Everybody was always invited and welcome. Cindy was the Bulldog Band drum major in her senior year so bandmen as well as her other friends were sure to be included in the guest list. ”

The Memolusia story that I came across in my research noted that vandals destroyed the interior of the cabin, the furniture and all the windows, at some point. After that, it was mostly used for campouts.

Among the many students who posted their memories of the cabin in 1983 in their Senior Last Will and Testament included:

Neal Campbell – “The guys and I have had many great times at ‘99 Acres.’ It’s a great place for people to get away from town and have parties without going far.”

Jan Perry – “I’ve been to many a party at the cabin. Those parties have been some of the finest times of my life! I will treasure the memories of the cabin always.”

Tom Kanaley – “Through the years, I have grown to love the place known as ‘Caton’s Cabin.’ It has been the sight of many good times and great memories.”

Todd Caton – “Being of sound mind and body, I leave all my great times down at ‘99 Acres’ to Scott Riley, Tommy Kanaley, Randy Snowden, Kenny Dorman, and Mr. Wingard. Last but not least, I leave for good!”

Everyone knows that the late Mr. Joe Wingard was not only an inspirational English teacher for 39 years but also a poet as is exemplified by his Anglophile-like comments. The Catons and the students who lovingly nicknamed Mr. Wingard, “Dingbat,” stated that a memorable inscription by a brand burned on the wall read, “Dingbat did not partake!”

As I Remember When, this writer says, “Hmmmmm! I am certain that that is the truth and nothing but the truth!”

Donald Hunter – “I leave to Andalusia High my advice to the students about Senior English. Don’t take it!”

Cindy and husband Chuck Studstill now live there on Brooklyn Road at “Magnolia Hill” where her late grandparents James and Lois Caton built their dream home. Parents Jimmy and Patricia Caton also built their family home on the farm which was eventually divided up in parcels among family members.

The cabin now long gone was situated on a portion of the property now known today as the campground, “The Oaks.”

The pond is still enjoyed by the family and part of the acreage was made into a grass runway for a small aircraft.

Yes, it’s so true – “Memories are Made of This,” sang the Statler Brothers.