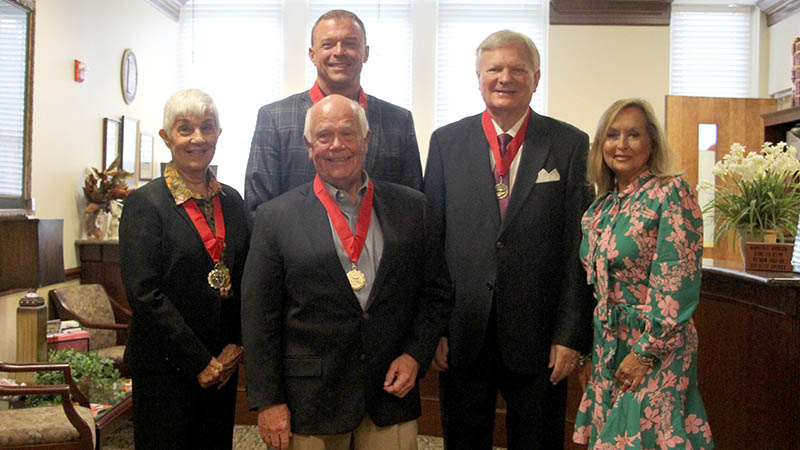 Nominations are accepted each year, and awards are made by members of the Outstanding Graduate Committee, currently chaired by Andalusia Mayor Earl Johnson (Class of 1965).

The five recipients selected as Outstanding Graduates on Friday join 47 previous recipients of the award.

Claude Burnett, a colonel in the U.S. Army, currently serves as Deputy Commander of the Landstuhl Regional Medical Center in Landstuhl, Germany, he also is chief of the Department of Obstetrics and Gynecology. A 1988 graduate of Andalusia High School, he earned his undergraduate degree from Howard University, and completed his medical training at Meharry Medical College in Nashville.

Burnett was unable to attend the ceremony due to health reasons. Keith Lewis accepted the award on his behalf from City of Andalusia Communications Director Michele Gerlach. “I’m extremely honored to receive the Andalusia High School Outstanding Graduate Award. I’ve received many numerous awards from my professional and military career, but this award is very special to me. It’s from my home, the place of my beginning, my upbringing, and the foundation to my system and outlook on life,” Burnett’s remarks as spoken by Lewis stated.

Sam Craven has excelled in two careers. After earning an undergraduate degree from the University of Alabama, he earned a juris doctorate from Loyola University’s New Orleans College of Law. He practiced law in Louisiana from 1972 until 2000, specializing in civil litigation. He earned a master in divinity from the Episcopal Seminary of the Southwest and was ordained as a priest in 2004. He served Episcopal churches in Texas until 2016. He also served in the U.S. Army Reserves. He is a 1964 graduate of Andalusia High School.

Craven accepted his award from Andalusia Mayor Earl Johnson. “Andalusia High School was a life-altering experience for me. I give thanks to all of you for making this city one of the most incredible places in the United States. Thank you to the committee for this outstanding award you have given me,” Craven said.

Sam Nichols spent his 37-year career as a teacher, coach and administrator in Alabama public school, and was superintendent of Dothan City Schools at the time of his retirement. He earned his undergraduate, master’s and educational specialist degrees from Troy University, and his doctorate from the University of Sarasota. Despite the years in education, he thought of himself as a U.S. Marine, and was proud of his service as a field radio operator in Vietnam. Sadly, he died last spring of lung disease related to his military service and exposure to Agent Orange. He is a 1965 graduate of Andalusia High School.

His wife of 50 years, Ellen Nichols, accepted the award on his behalf from Mayor Johnson. “What a special day. Sam often spoke so highly of his hometown and this great city of Andalusia. He had such a deep love for this town and always admired it,” Nichols’ wife Ellen said.

Margo Russell has exhibited and sold art across the Southeast, and worked as an art administrator. But, her most lasting contribution has been as an art teacher, instilling her passion for the arts in public schools, as a faculty member at institutions of higher learning and in private lessons. She earned a bachelor of fine arts from the University of Alabama and a master of science from Florida State University, and completed additional studies at the Institute of Arts Administration and at the Silver Mine School of the Arts in Connecticut. She is a 1961 graduate of Andalusia High School.

Russell accepted the award from Gerlach. “I am humbled by this honor I have received today. You all made my eyes cry. What a wonderful honor this is and what a wonderful place to live,” she said.

Lee Wilson is using cutting edge techniques in the pursuit of better outcomes and quicker recoveries for his orthopedic patients. He has been in private practice as an orthopedic surgeon in Gadsden since June of 2011, and currently is a partner at Northeast Orthopedics. He is a 1993 graduate of Andalusia High School.

Wilson accepted the award from Mayor Johnson. “It was such an honor to even be nominated for this award. I am humbled to be selected for this recognition that has been bestowed upon me,” Wilson said.