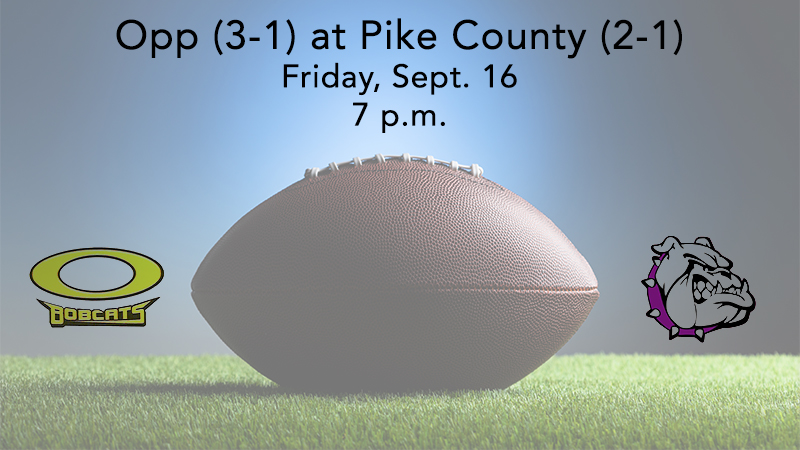 This contest will be the 22nd all-time meeting as the Bulldogs hold a 14-7 lead over the Bobcats dating back to 1924.

Head Coach Mike Dubose has been studying Pike County on film in preparation for this week’s game.

“They have changed quite a bit from the start of the season until now and had some people transfer in. They’re a big, physical team who plays really hard and are not the same team as they looked at the beginning of the year. They have a lot more student-athletes on the field than on the sidelines to choose from. Other than Andalusia, they will be the best team we’ve played so far this season,” he said.

Dubose added that Opp is still working on many areas of improvement with its offense, defense, and special teams.

“We thought it would be a really physical game that would go four quarters against Providence, and that’s exactly what it was. I thought they did a great job with their defensive schemes and gave us trouble from a pass-protection standpoint with a five-man blitz. Our kids played hard and physical, and I thought our defense played well with the exception of two or three big pass plays. It turned into a game for both teams there at the end, but we made the plays and found a way to win. One thing I keep telling our guys is that we need to play better.”

The Bobcats understand making the trip to Brundidge will present them with a challenge. “It’s always a tough place to play there, and they have big offensive and defensive lines. It will be a great opportunity for us to take another step, and going to Pike County will say a lot about us as a football program,” Dubose said.

Pike County won the last matchup in 2019, 44-13, and has won three straight games over Opp. The Bobcats edged Providence Christian at home last week, 20-14, while the Bulldogs defeated Northside Methodist on the road, 28-18.