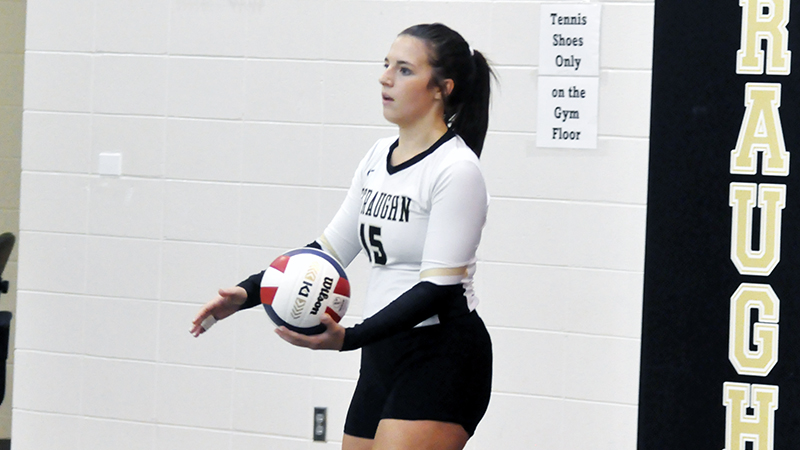 Both teams battled in a tight contest as Straughn avenged an earlier four-set loss to New Brockton with a senior night 3-0 sweep in area volleyball action Thursday night. 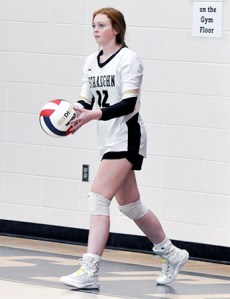 “We have had to make some changes and brought a player up from JV. We went five sets against Opp and beat them, so they’re learning to gel together. I think they showed that tonight. We worked on some things and knew they had a good middle who was going to put it in different spots. My girls worked really hard to cover those spots tonight and worked well as a team. They pulled together for the seniors and their love of the game,” Head Coach Deidra Burleson said.

SET 1 (Straughn 25, New Brockton 12)
Senior Katelyn Dewrell delivered an ace for the first point as Straughn took a 4-0 lead. Anna Clark had a kill as New Brockton cut its deficit back to 6-4. Claire Howe also hit an ace as the Lady Tigers went on an 8-2 run and built a 14-6 lead. Seniors Kaylee Murphy and Carlin Bates both picked up points for a 20-8 lead. Clark scored another ace for the Lady Gamecocks, but it was not enough as the opening set came to a close. 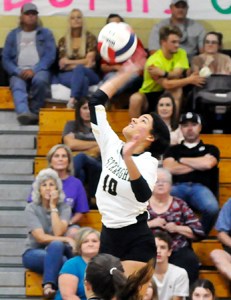 Alyssa Richardson goes up for one of her five kills Thursday night.

SET 2 (Straughn 26, New Brockton 24)
The two sides went back and forth in the second set. Howe knocked a kill to tie the score at 4-4 before two aces from Bates pushed the Lady Tigers to a 7-4 lead. Ava Elmore had an ace as the Lady Gamecocks took a 10-8 advantage. Two aces by Howe and one by Emily Nelson gave Straughn a 14-12 margin. After New Brockton forced a 14-14 tie, Alyssa Richardson had two mighty kills, and Bates also blistered one for a 20-19 lead. Both teams continued to battle down the stretch before a kill from Dewrell ended the frame.

Alyssa Richardson goes up for one of her five kills Thursday night.

SET 3 (Straughn 25, New Brockton 22)
Richardson began the third set with a kill for a 2-0 lead. AnnaLynn Hanson gave New Brockton a 3-2 lead with an ace. Mallory Hall, Dewrell, and Richardson each earned kills, as Straughn remained close. The Lady Gamecocks built a 16-9 lead with five straight points. Two aces from Murphy along with a block by Bates trimmed the gap to 17-15 before Kyleigh Jackson evened the score at 19-19 with a kill. The two teams hung tough and forced two more ties. Hall executed back-to-back aces for match point, and Richardson delivered the final kill as the Lady Tigers finished off the sweep. 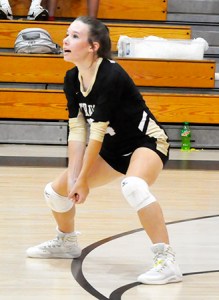 Presley Melvin braces for a dig on offense as the Lady Tigers swept New Brockton in a 3A Area 3 match Thursday night.

Dewrell finished with two kills, one ace, and 13 assists. Bates tallied one kill, two aces, one block, and one dig. Murphy notched three aces and two digs. Howe added five kills, three aces, and three assists, while Richardson also had five kills. Jackson collected three kills and a block and was followed by Hall who had two aces.

Burleson added that her three seniors are going to be a huge loss. “They have really led the team in us being a family and really loving each other. We want what’s best for each another, and that’s important in volleyball because when you love each other and want each other to do well, you communicate on the floor.” 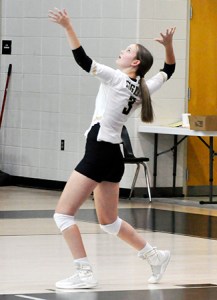 Straughn will close area play with a visit from Pike County in a JV-varsity doubleheader Tuesday, Sept. 20, at 4 p.m.