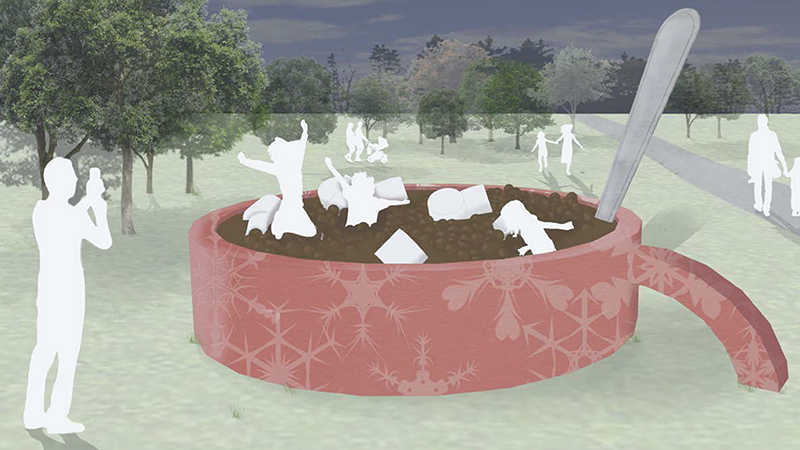 The Andalusia City Council approved a budget and plans for this year’s Christmas in Candyland activities. Pictured above is a rendering of the cocoa ball pit, which will be a new children’s activity. (PHOTO PROVIDED)

The Andalusia City Council last week approved plans and expenses for the 2022 Christmas in Candyland that the addition of a second train for Santa and friends, a cocoa ball pit, and more snow than ever.

Chamber Executive Director Laura Wells pitched the plans to the council in two separate meetings and said the Chamber plans to repurpose the original train engine purchased for Candyland. That engine proved not strong enough to pull all of the cars added to the train ride and was replaced with a stronger train engine. The Chamber is adding a “Santa’s sleigh” car to the original train engine, which will be used to parade Santa, Elsa, and other characters into Candyland.

This year, the Chamber will work with Meredith’s Miracles, which will provide characters to perform shows each weekend, Wells said.

The plan also includes a new Cocoa Ball Pit, an attraction for younger children. The large cup of “cocoa,” which is about 2 feet tall, will be filled with balls reminiscent of ball playgrounds at fast food restaurants and will look like a huge cup of cocoa. The cup handle will be a slide.

The Chamber also plans to replace the tubes of the Polar Bear Slide, add snow to the slide and to the skating rink, and add digital signage.

The council approved a budget of $101,894, much of which will be offset with sponsorships.

This year marks the 9th year of Christmas in Candyland, which drew more than 70,000 visits in 2021, as well as state and national media attention. Since its inception, retail sales have increased 29 percent in the month of December.