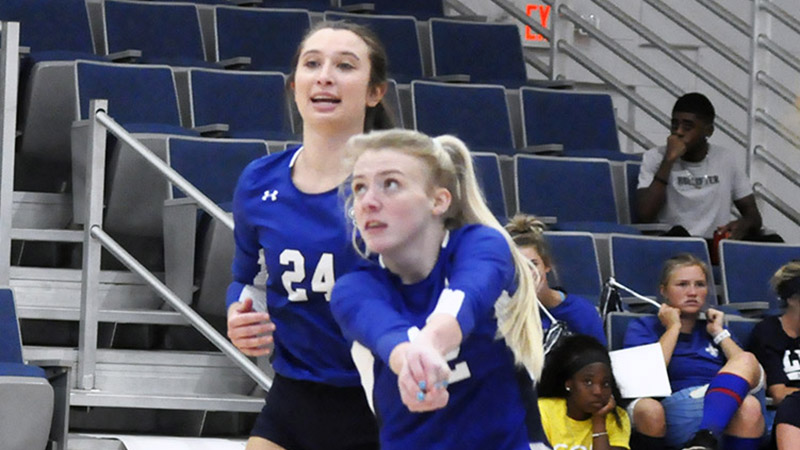 Maggie Haynes, right, prepares to set the ball as Alexandra Green watches from behind. (PHOTOS BY ZACK MAIO) 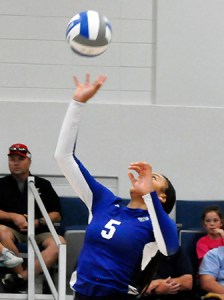 Zationna Horne goes up to make a big play for the Saints.

“I knew Enterprise would be competitive, and they continue to get better. Vanessa (Howell) is a great coach. I knew it was going to be a tough match and definitely didn’t underestimate them. Our girls have worked hard and knew they had to execute. We had so many errors and changed up some things on defense, which has worked well for us. The main thing is that we can’t beat ourselves,” Head Coach Janie Wiggins said.

SET 1 (LBW 25, Enterprise State 17)
Both teams split the first four points of the match as Zationna Horne and Caroline Bailey each earned a kill. LBW took a 4-2 lead before a kill by Jazlyn Sisco and an ace from Kayden Taylor gave ESCC a 7-6 lead. Neither side could build more than a two-point lead until Faith Peters delivered a kill for a 17-14 margin. Back-to-back kills from Rhiannon Keck and Brianna Wilson increased the lead to 21-15. The Boll Weevils closed the gap to 22-17 but could not draw closer as the Saints took the opening set. 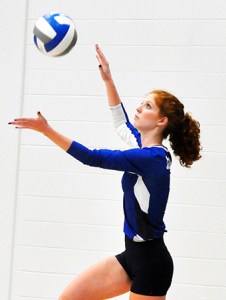 Ashton McCullar keeps a close eye on the ball during a serve.

SET 2 (LBW 25, Enterprise State 22)
The second set began similarly to the first one. Peters hit a thundering kill for a 5-2 lead, but Enterprise State forced a 6-6 tie. Keck broke the tie with a kill, and Horne followed with two kills. The Boll Weevils overcame an 11-8 deficit and rallied back for a 15-12 lead. The moment was short-lived when the Saints went on a 10-2 surge and took a 22-17 advantage. Keck tied the score at 15-15 and made the score 17-16 with a pair of kills. Maddie Rasmussen had an ace for a 20-17 lead, and Wilson executed a block for set point. Lucy Griffin kept hope alive for the opposition, but it was too late as Bailey scored a kill for a 2-0 lead in the match.

SET 3 (Enterprise State 25, LBW 19)
LBW took a 5-3 lead in the third set only to see Sisco even the score at 5-5 with a kill and an ace. Griffin had a block as Tiyanna Preston earned a kill for a 9-8 lead. Enterprise State built a 14-11 margin before yet another tie at 14-14. The Boll Weevils went on a 10-4 surge with two more kills from Preston and reached set point at 24-18. Alexandra Green kept the Saints alive with a kill, but Sisco also had one and kept the match going. 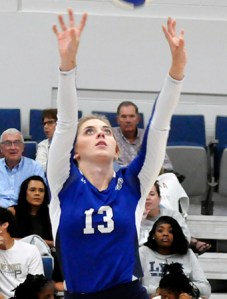 Maddie Rasmussen sets the ball for one of her teammates during a play on offense for LBW.

SET 4 (LBW 25, Enterprise State 17)
Maggie Haynes had an ace for a 2-1 lead in the fourth set. Green broke a 3-3 tie and jumpstarted an 8-2 run with an ace. Samia Mason gave LBW an 11-5 lead with an ace, while Horne blistered a pair of kills for a 16-10 lead. Bailey and Peters also picked up two kills as the margin grew to eight. Sisco used an ace as Preston knocked a kill that trimmed the deficit to 22-15. Enterprise State fought back and trailed 24-17 before Wilson called match over with a thundering kill.

Wiggins added that earning the team’s eighth win after finishing the 2021 season with seven total wins feels good. “Looking back at all the five sets we went, there should be a lot more than that with the opportunities we had. The important thing is that they keep getting better and trying to find a way to win, which is what we’re focusing on.” 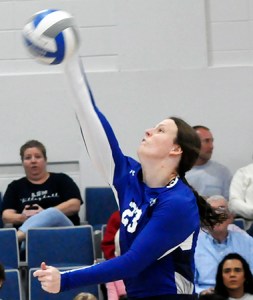 Faith Peters uses her strength for a kill during LBW’s home conference match against Enterprise State.

LBW will head to Poplarville, Mississippi, for a non-conference doubleheader Wednesday, Sept. 21, and square off with Northwest Mississippi CC (6-8) at 4 p.m. and Pearl River CC (9-8) at 6 p.m.