Andalusia looks to stay perfect on road to Bibb County 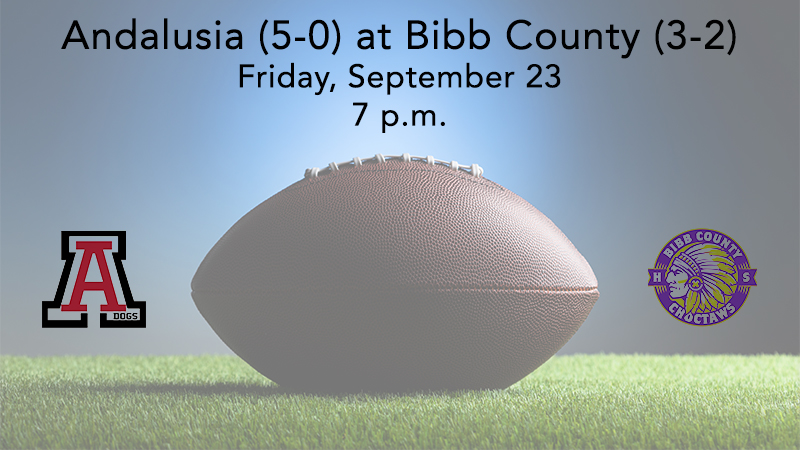 With a successful trip to Montgomery now complete, Andalusia (5-0) will step away from the region schedule with a trip to Bibb County (3-2) Friday, Sept. 23, at 7 p.m.

This year will be the fifth meeting between the two teams with the series tied at 2-2. The Bulldogs have two straight shutout wins after the Choctaws won the first two games.

“Matt Geohagan is a Covington County young man who does a great job and has been very successful up there. Bibb County is a really good football team that will probably be the biggest we’ve played up to this point. They are very similar to Milton as far as their offensive and defensive lines are concerned, and they play in a tough region. We have a long road trip and play a good football team, but it will be good for us,” Head Coach Trent Taylor said.

“Montgomery Academy has a really good football team that played for the state championship a year ago. Our kids knew all that and had a really good week of practice leading up to the game. From a defensive standpoint, I think our kids executed almost flawlessly. Offensively, it was really and truly a tale of our offensive line clicking the other night. There were a couple times we were behind the sticks, but we were able to complete a couple of balls and get back on track. It was a really good team win for us going into a non-region week.”

According to Taylor, the long road trip to Centreville will be good for Andalusia. “Because of where we are located in the state, most of your playoff trips are not close by. To have a game like this on your schedule just to acclimate the kids a little bit lets them understand what the expectations are. It’s good to play a game that far away,” he said.

The Bulldogs were victorious against the Choctaws in 2021, 25-0. Both teams earned region wins last week as Andalusia defeated Montgomery Academy, 49-7, and Bibb County took down Sipsey Valley at home, 56-10.