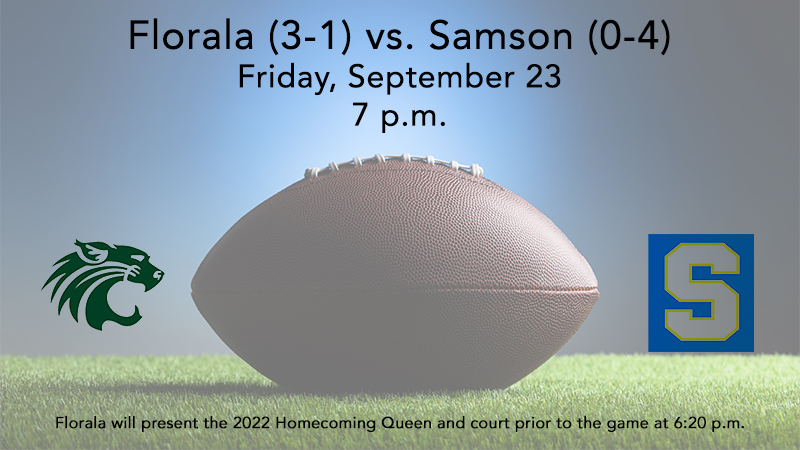 After picking up a huge region road win, Florala (3-1) will have alumni return this week with a homecoming contest against Samson (0-4) Friday, Sept. 23, at 7 p.m.

The 2022 Homecoming Queen and court will be presented beginning at 6:20 p.m.

It will be the 64th matchup of the two teams with the Wildcats holding a 35-26-2 series lead over the Tigers.

“Homecoming festivities get your mind off the game if you don’t concentrate, so we have to make sure we do that. I know Samson will be a tough opponent, and we just traded film with them Saturday night. I really think they’re a good football team. They haven’t won a game, but that’s really deceiving. I know they will be hungry for a win after coming up short a few times,” Head Coach Jordan Cantrell said.

Cantrell was proud of the Wildcats in their game at Pleasant Home.

“We’ve had some injuries and had to rely on young guys and others playing positions they weren’t playing at the start of the year. The guys showed a lot of effort and desire to go out and perform. It’s not a perfect performance by any means, but we’re happy with the way they competed. We have to keep going week to week, keep the energy up, and keep rolling,” he added.

The teams have split the last two contests as the Tigers earned a 30-20 home win over the Wildcats in 2021. Last week, Florala dispatched rival Pleasant Home, 50-20, while Samson was shut out by Cottonwood at home, 22-0.