Town of Sanford honors one of its own, renames section of Hwy. 84 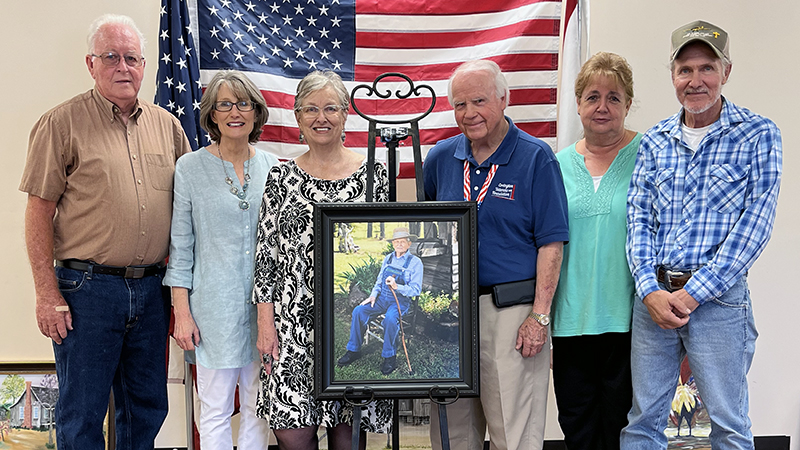 A section of U.S. Highway 84 will now be known as the PFC LaFelt Brannon Memorial Intersection following a ceremony held Friday, Sept. 16, at Sanford Town Hall. 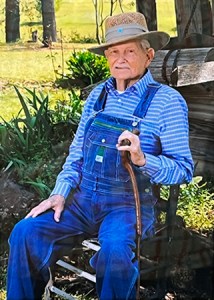 “We are glad and thankful you all were able to come out and join us in this celebration the Brannon family and Town of Sanford are putting together for a very special person. When I was growing up, he was a fixture here in Sanford. All of us that have been residents of Sanford can share special memories about him. He was a man who loved his family and community,” said Mayor Chris Thomasson.

Mt. Pisgah Baptist Church Pastor Ed Ganus added that Brannon was a very hard-working and skilled man. “He could do anything and had a talent like you don’t find in a lot of people. I had the privilege of being his pastor for about five years, and he was a blessing every Sunday. He was faithful to the Lord and to his church. He served our country and won two Purple Hearts and various campaign medals along with a Bronze Star.”

Private First Class LaFelt Brannon was born on March 12, 1921, and passed away Dec. 29, 2020, at the age of 99. He moved to Sanford when he was eight years old and served on the Army’s front lines from 1942 to 1945. He was wounded near St. Malo, France, and spent three months recuperating in a Birmingham, United Kingdom hospital. 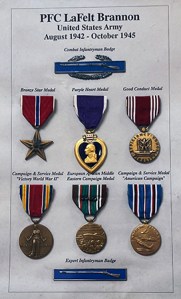 LaFelt Brannon was the recipient of several awards during his service in the United States Army. (SUBMITTED PHOTO)

“I first met LaFelt in 2015. He was a part of ‘The Greatest Generation’ and lived through the Great Depression. After his recuperation, he was sent back to the front lines and assigned to the famous 104th Infantry Division, the famed Timberwolves. During a lull in the fighting, he won $500 in a poker game. He sent $300 to his parents who bought a pair of mules and sent him a picture with the mules. I want to thank Mr. Brannon’s family and the town of Sanford for allowing me to be here today and honor this WWII hero,” Covington Veterans Foundation Founder John Vick said.

Brannon was near Dessau, Germany, when Germany surrendered and was one of only three in the 12-man squad to survive the war. After working many years at various jobs including a long stint at Dorsey Trailers in Elba, he retired at 78 and took up painting local folk art, which was featured at several exhibits. Proceeds from the sale of some of his paintings helped sponsor local Honor Flights. Brannon was on the first Covington Region Honor Flight in May 2009.

“God puts people in our lives to enhance our lives, and He put LaFelt Brannon in our lives. His God was his first priority, and he enjoyed reading the Bible. His second priority was his family, and he loved all three of his children. He helped me build my house and barn and was one of the smartest people I knew. His character is what he took to war with him, but he brought back his personality and character. It made a huge impact in our community. I know his family is very proud of him, and he is a great man with Jesus Christ in heaven right now,” Sanford Town Councilman Tony Wells said.

Brannon’s daughter Cathy Bozeman was grateful for those who attended the ceremony. 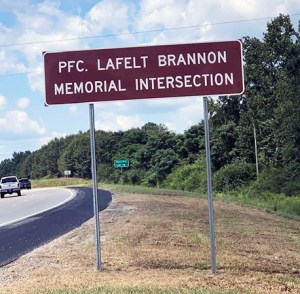 “We just can’t thank everybody enough for coming and honoring Daddy and Momma. We all loved our parents and thought highly of them. Most of all, I want to thank the Lord for letting Daddy and Momma be my parents. My husband Hilton helped us with Daddy these last few years, and it was a wonderful privilege to let Daddy live with us as long as he did. My sweetest memory of him was when he got down on his knees and accepted the Lord in 1974,” Bozeman said.

Wells approached Alabama State Representative Mike Jones about naming a part of U.S. Highway 84 as the PFC LaFelt Brannon Memorial Intersection. “I want to thank everybody and Tony for getting this started and Mr. Vick for being here. Our job is to support the veterans and support our fellow man. God bless America,” Brannon’s other daughter Patty Sutton said.