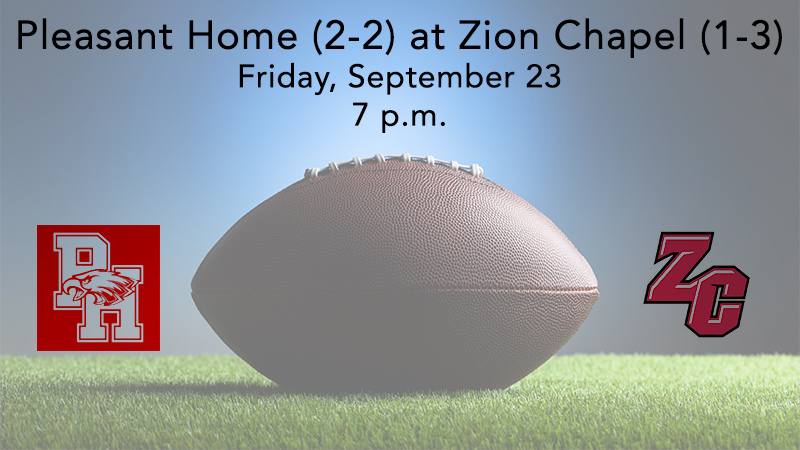 The two teams face off for the 17th time. The Rebels, winners of five straight in the series, have an 11-5 edge over the Eagles.

“Zion Chapel is a physical football team, and their coach does a great job scheming up to play to their strengths. They are very big up front and have enough speed out wide to keep you honest. Defensively, they have shown a few different looks but always fly to the ball and play a full four quarters. Both teams need this win, and I anticipate a war this coming Friday,” Head Coach Cody Sellers said.

He added that Pleasant Home would have to rebound quickly in order to compete. “This halfway point feels like a turning point in our season, and we will need to do whatever it takes to go down the path of success. We wanted to have a winning record halfway through the season and still have the chance to accomplish that. However, it will not be easy, and we fully expect to get their best game. Our goal is to improve each week and be better each Friday than we were the previous one. We must prepare to play our best game of the season to get the win.”

According to Sellers, the Eagles struggled with Florala’s athleticism.

“We simply could not stop their quarterback (Rayshon Coleman) who broke a number of tackles. He was simply too fast for us to catch when he broke it open. It felt like number 11 for them (Zane Weeks) was always around the ball on defense and was almost unblockable for most of the game. Those are two really good players, and their coaching staff did a great job getting their team ready to play. We did not trust and react to our read keys on defense, which cost us. Offensively, we had some success but couldn’t finish drives as consistently as we needed to in order to compete in the shootout-style game it was. The kickoff return turnovers were backbreaking and proved too much for us to overcome. We will continue to work on our deficiencies and build on our strengths,” he said.