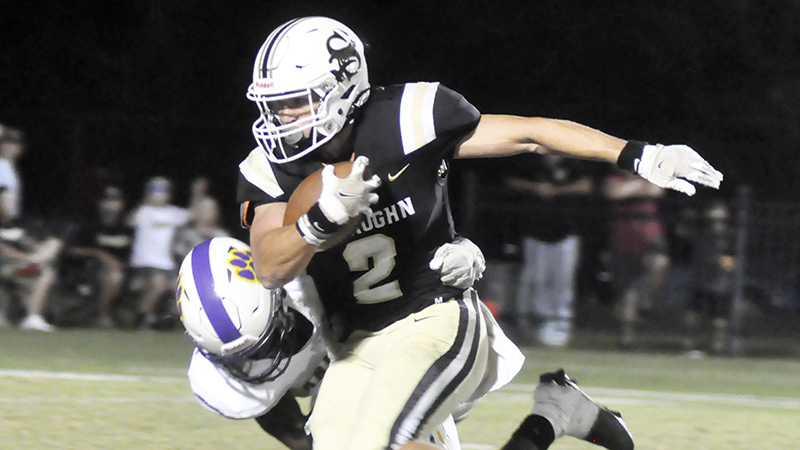 Aaron Olhava shakes off an Ariton defender as he scores one of his two touchdowns during Straughn’s hard-fought homecoming loss Friday night. (PHOTO BY ZACK MAIO)

Straughn overcame a two-touchdown halftime deficit and put forth a valiant effort but came up short 28-14 to Ariton in the school’s annual homecoming game Friday night.

Aaron Olhava returned the opening kickoff 54 yards to the opposing 41-yard line. After a pair of mild runs, Layne Grantham found Micah Turner on a 9-yard third-down pass. Olhava followed with a 38-yard rush and gave the Tigers a first down at the 5-yard line before a costly fumble. The Purple Cats took over and struck first after a 14-play, 92-yard drive. Landon Tyler scooped up the ball after it bounced off the ground and ran it into the end zone for what was ruled a touchdown. The PAT was good for a 7-0 lead at the end of the first quarter.

Straughn (4-1) tied the score with a 55-yard touchdown run from Olhava, but the call was negated due to a personal foul call. Andyn Garris intercepted the very next play for Ariton (5-1). Both teams traded three-and-outs and punted on their next possessions. Jordan Smith opened the drive with a 12-yard run and added a 15-yard scamper past midfield. Smith scored from a yard out and gave the Purple Cats a 14-0 lead with 55 seconds left until halftime. The Tigers earned a first down when Grantham threw a 40-yard pass to Grant Barnes just before the first half ended.

Ariton began the second half with a 16-yard pass for a first down but was turned away when Charlie Jordan hauled in a critical interception. Nicholas Williams and Olhava each started the next drive with back-to-back 9-yard rushes. Grantham moved the chains with a 13-yard gain. Three plays later, Olhava cut the deficit in half with a 19-yard touchdown run. Brenden Bartholomew was true on the extra point and brought Straughn within 14-7 at the 6:48 mark of the third quarter.

The defense forced another three-and-out and received a huge punt return from Barnes. Olhava picked up his second touchdown on a 2-yard run following a big 23-yard rush. Bartholomew split the uprights and tied the score at 14-14 at the end of the third quarter.

The Purple Cats converted a fourth down with a 13-yard pass on the initial play of the final quarter. Ian Senn found the end zone from two yards out and took the score to 21-14. The Tigers faced a third and long but saw their next drive abruptly end with an interception by Christian Brown. Ariton only needed two plays and a 19-yard touchdown run to increase its lead to 28-14 with 7:13 to play. Backed up at the 11, Grantham threw a 33-yard strike to Parker Black for a first down. Olhava crossed into opposing territory with two runs, but Straughn was stopped with a turnover on downs. The visitors did not make another threat and ran out the clock.