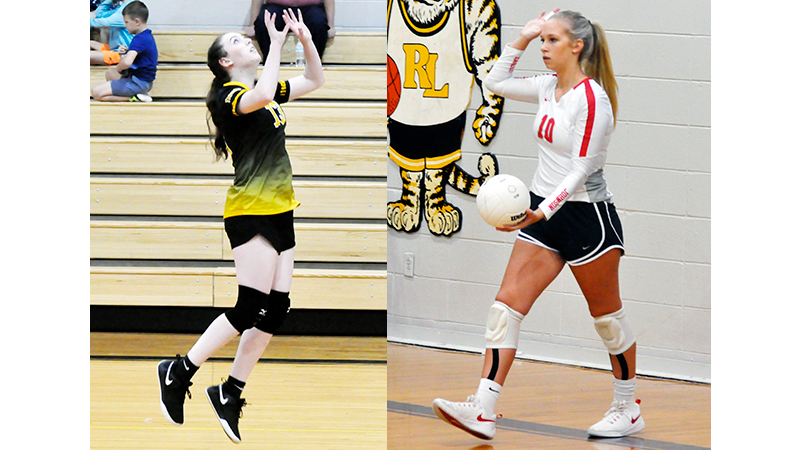 Red Level hosted Pleasant Home for a 1A Area 2 volleyball match Thursday, Sept. 22. LEFT: The Tigers’ Kayley Peebles leaps in the air as she prepares to hit the ball over the net. RIGHT: The Eagles’ Bailey Johnson keeps a watchful eye on her opponent prior to a serve. (PHOTOS BY ZACK MAIO)

Pleasant Home worked fast and needed less than an hour to pick up a 3-0 area volleyball win at Red Level on Thursday.

“The win at Red Level felt good. We’ve had a long week with three games this week. We took one on the chin Monday night at home but bounced back with a couple of wins throughout the rest of the week. We have three more area matches next week beginning with a big test Monday at Brantley. We’ve had a little adversity throughout the year and are missing a couple of girls right now. We have to make some readjustments and fine-tune some things to get ready for area tournament play and hopefully anything further after that,” PHS Head Coach Tony Wilson said.

SET 1 (Pleasant Home 25, Red Level 9)
Pleasant Home took an early 2-0 lead on an ace from Meredith Wilson and a kill by Hailey Ward. Red Level cut the deficit to 4-2 before Kayden Weaver hit consecutive aces. Ward then scored three straight aces and increased the lead to 12-3. The Lady Tigers closed the gap back to seven points but were unable to draw closer. Bailey Johnson capped a 6-0 run with back-to-back aces for a 20-7 margin. Bailey Green made the score 20-9 with an ace until the Lady Eagles had the final five points for an early 1-0 lead.

SET 2 (Pleasant Home 25, Red Level 20)
The action went back and forth early in the second set with seven ties. The Lady Eagles garnered breathing room with an 18-7 lead. Wilson hit an ace as Audrey Hughes added a kill, and Ward smacked two kills during the 11-0 spree. The Lady Tigers were able to get within 20-13 thanks to aces by seniors Elizabeth Cross and Summer Beverly along with a kill from senior Kayley Peebles. After four straight visiting points, Green had a kill as Red Level averted set point with a 7-0 run and trailed 24-20. Johnson closed the set with a kill and gave Pleasant Home a 2-0 lead.

SET 3 (Pleasant Home 25, Red Level 12)
Pleasant Home took a 5-1 lead in the third set before Red Level cut the deficit down to 9-5. Each team then scored five points and kept the frame tight as the score moved to 14-10. The Lady Eagles followed with six of the next eight points and took a 20-12 advantage. The Lady Tigers received a kill by Peebles as Weaver and Ward each notched an ace. Ward grabbed another two aces during a 5-0 run down the stretch that capped off the sweep.