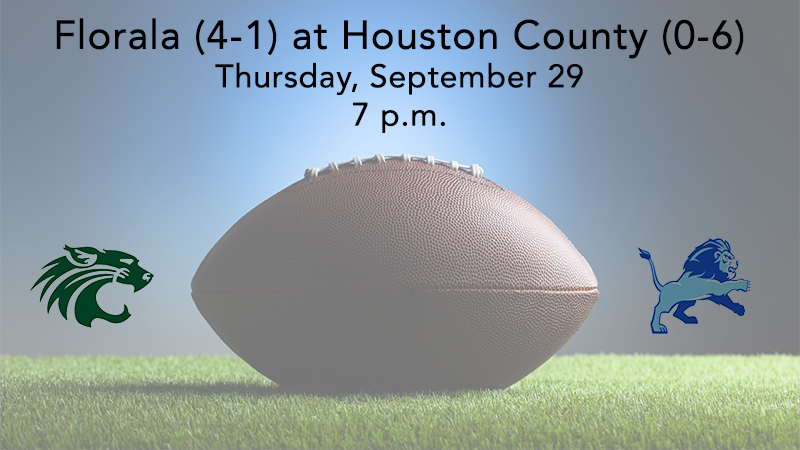 This game will mark the ninth matchup between the two teams. The Lions have a 5-3 lead over the Wildcats in the series dating back to 1984.

“Just like Samson, Houston County has had some tough times but is probably one of the best personnel teams we’ve faced as far as size. They have had a rough go of it, and adversity happens. We can’t take these dudes lightly at all and know there will be a lot of dissecting on the film to do. They are well-coached and have really good personnel even in hard times. We have to make it happen and be mentally and physically tough for the long road trip,” said Head Coach Jordan Cantrell.

Cantrell referred to Florala’s game against Samson as a “wild affair” and added that homecoming festivities made for a great week with a lot of school pride.

“Our principal Mr. (Max) Whittaker puts a big emphasis on it and really makes it good for the kids. It was a busy week, and we came out firing on all cylinders in the first half. We had one mistake on a turnover that led to a score. Samson did a good job making adjustments and came out more fired up than us. They made it a battle in the second half, but I was really happy the kids persevered when we battled adversity.”

The Wildcats improved on a three-win 2021 campaign with their fourth victory last week. “A lot of people counted us out this year and said it was going to be a tough year. Looks can be deceiving when you see us warming up on the field. I’m really happy with how hard these guys work and how our school rallies around us. Everybody is working together and pulling in the same direction,” he said.

The Wildcats fell to the Lions on the road last season, 21-12. Florala doubled up Samson last week at home, 28-14, and Houston County was shut out, 28-0, by Pataula Charter Academy from Georgia.