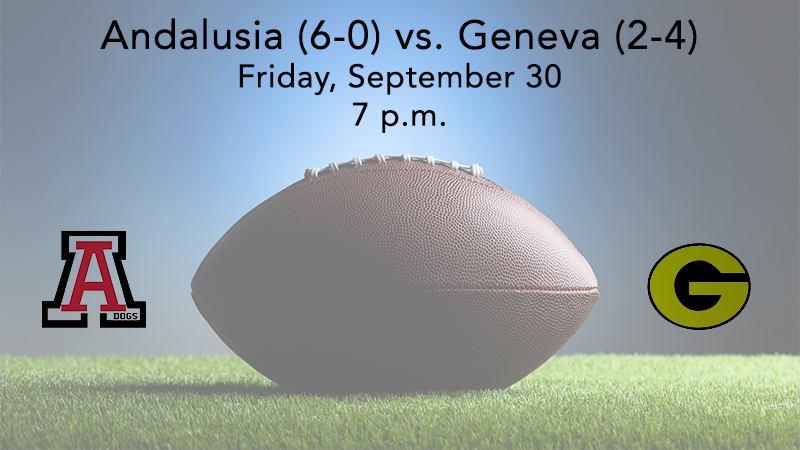 The two teams will meet for the 24th time and have not played each other since 2007. The Bulldogs have an all-time 17-6 lead over the Panthers.

“It will be nice to be back home for three of the last four weeks. Coach (Les) Sanders does a great job with Geneva. They are young and disciplined with kids who play hard. We have to make sure we take care of Andalusia and do things we need to do to improve. It’s great to be where we’re at right now at 6-0, but we can’t be satisfied. There are so many things we need to get better at. We will focus on Geneva’s offense and defense but also put our kids in a place to be successful,” Head Coach Trent Taylor said.

The trip to Bibb County was successful for Andalusia.

“It’s a long way up there and a long way back but is similar to what we would have in the playoffs. It’s probably good for us at this point in the year to have a game like that. They started the game with a great game plan on defense and really had us stymied on the first drive. We were able to force some turnovers and get away from them, but they are a great football team. With Coach (Matt) Geohagan, they will get better as the year goes along and will be a tough out for somebody in the playoffs,” he said.

According to Taylor, the offense and defense played well.

“We gave up 18 points but defensively got a lot out of it. I was really proud of the job Tyler Sigers did in the secondary, and he is getting better each week. The rest of the secondary (Parker Adams, Kal Crittenden, and Kaden Denson) played extremely well. Offensively, J’Marion (Burnette) and Dorean (Crittenden) had a really big night. They ran harder and had to because they were so big and strong up front, but our offensive line did a great job.”

Andalusia was victorious at Geneva, 40-21, in the last meeting. Last week, the Bulldogs routed Bibb County, 55-18, while the Panthers defeated Geneva County at home, 40-33.