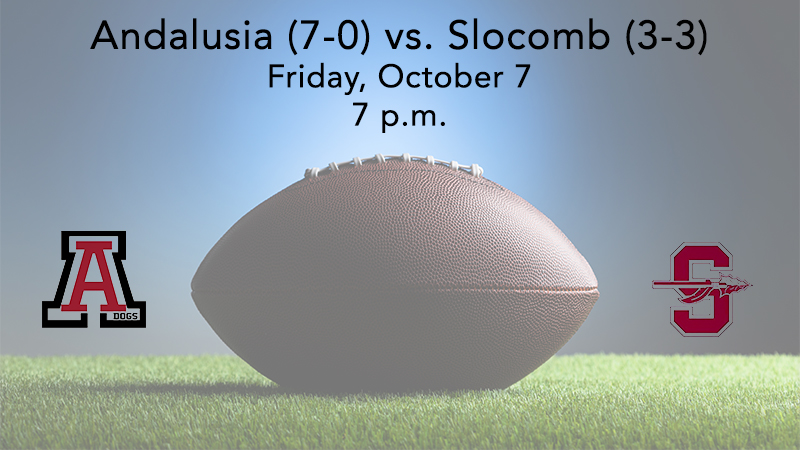 This year will be the first-ever meeting between the Bulldogs and Red Tops.

“Usually, when you get into region play, you start collecting films on everybody, but until we did a film swap with Slocomb on Saturday, I hadn’t even seen them. I have seen some of their scores and know they had a big win last Friday night. They have a new head coach who is implementing a new system both offensively and defensively. Their kids play hard from seeing them on film and have a bit of a different style of offense than what we’re used to. They’re a ground-and-pound type offense, so it will be a challenge for our front guys to play well. Defensively, they have some guys that run to the ball. It ought to be a really good matchup,” said Head Coach Trent Taylor.

The 50-point win over Geneva last week allowed Andalusia to play everyone who was dressed out.

“That’s always a good thing and makes practice a little bit easier the next week when they know they were able to contribute in some way. The truth is that those kids work just as hard and deserve that opportunity, so it was good to be at home. We did some good things in the kicking game. When you get to this point in the year, you have to do some self-analysis in all aspects of the game and ask yourself what are we doing well and not doing well. We will take what we need to improve on and build off that,” he said.

Taylor added that having two consecutive home games was a nice feeling. “We haven’t had that since last year, and it’s good to be home for two in a row. We had a great crowd last Friday night, and I was glad to see people who were hungry to see us back here.”