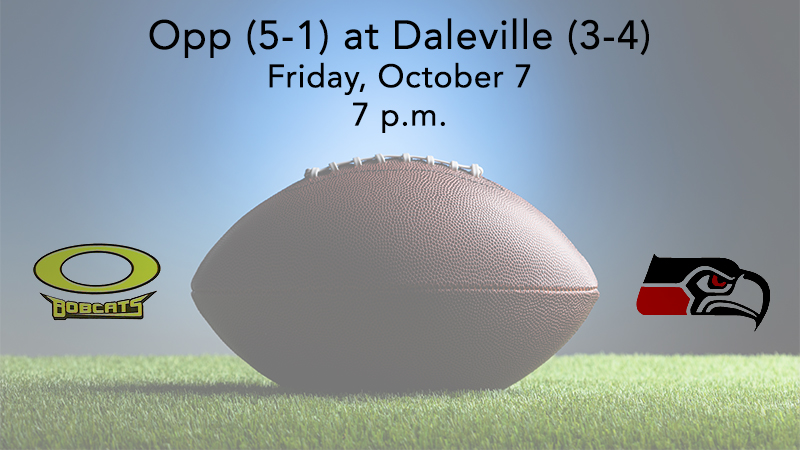 The teams, which first played in 1982, will battle for the 25th time overall. The series is even at 12-12, but the Bobcats have won five of their last six against the Warriors.

“Daleville is much improved, and Will (Garner) has done a great job there. When he took it over, they were a very young football team but are now becoming a junior and senior team. They have a big offensive line and really good skill players at quarterback and running back with speed downfield when they want to throw it deep. We’re not sure what we will get from a defensive standpoint and will need to have a plan to be prepared this Friday,” said Head Coach Mike Dubose.

While the bye week was beneficial for Opp, some of the team’s injured players are hopeful they will be able to return.

“We got some good work done but not as much as I was hoping to get done. Some of it is because of injuries, and a few guys are not able to go. We didn’t get to work with them but were able to work with some of the younger guys who may or may not be ready to play this year. I would like for us to be able to develop a little bit more depth and work with some of those guys we have to line up with on the first and second teams,” he said.

Dubose stated there was a fundamental standpoint by the Bobcats not playing last week. “We were able to work with the guys on an individual basis. Our coaches did a lot more individual time and had time they don’t normally get when they’re getting ready for a game.”

Opp had no trouble in the 2021 game and posted a 55-0 home shutout over Daleville. The Bobcats were off last week, but the Warriors saw their three-game winning streak snapped against Ashford at home, 38-22.