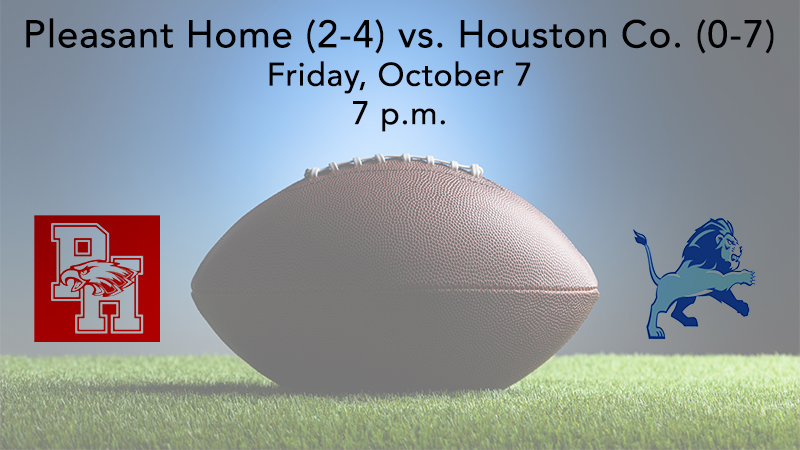 It will be the fifth meeting of the two teams. The Eagles won the first matchup in 2002, while the Lions have won the last three matchups.

“Houston County has speed at their skill positions, which always gives a coach concerns. They are very multiple on both offense and defense. They come out in a number of formations and will take advantage of alignment issues if you do not adjust. Defensively, they have moved their guys around in order to cause confusion for the opposing offense. They are well-coached and have already been battle-tested by the best in our region. Once again, we find ourselves in a region contest both teams are in desperate need of a win,” Head Coach Cody Sellers said.

According to Sellers, Pleasant Home struggled to stop Kinston defensively and could not stand up to their size last week.

“Our guys played better assignment-wise on defense than the previous week but could not tackle their ball carriers. Offensively, I felt we moved the ball well, but penalties killed almost all our drives. We had 16 penalties that cost us 160 yards. Almost every one was when we had the ball. We have averaged seven penalties per game for the year and uncharacteristically had way more than we could afford last Friday.”

The Eagles will be happy about playing at home. “I know it hasn’t been that long, but it feels like forever. Our boosters and fans do a great job making our Friday night environment great, and we enjoy playing in front of them. With some of our injuries, we have had to throw some of our youth into combat early. My experience has been youth usually plays better at home, and I hope that is the case this week,” he said.