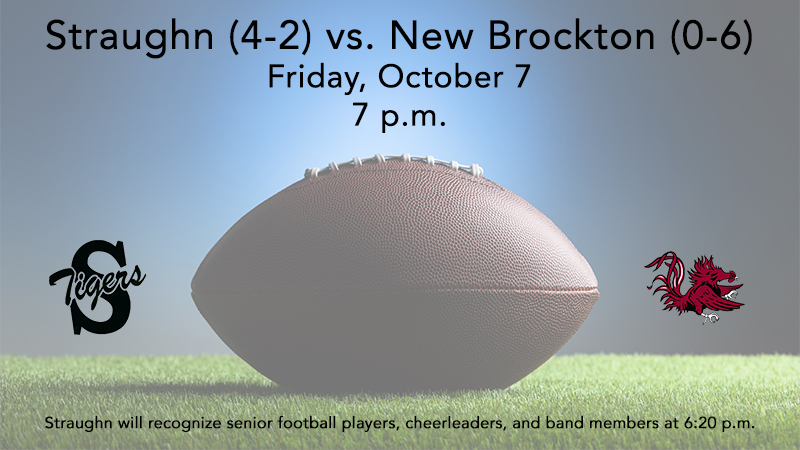 Senior band members, cheerleaders, and football players will be recognized at 6:20 p.m.

The two teams face each other for the 16th time overall but have not met since the 1999 season. The Tigers have an 8-7 series lead against the Gamecocks.

“New Brockton hasn’t won a game this year, but they do not look like a team that is winless when you watch them on film. They are explosive on offense and have had some hard luck with turnovers. They will be hungry, so we have to be ready to play,” said Head Coach Ashley Kilcrease.

Kilcrease added that Straughn played really hard against Houston Academy last week. “They were a very good football team, undefeated, and had not been in a close game. We felt like if we could make it a four-quarter game, we liked our chances. We did that and had another touchdown taken off the board in the fourth quarter that really hurt. They answered every time we got the lead, so you have to give them a lot of credit as well.”

He is thankful for his seniors and their contributions to the program.

“Aaron Olhava, Micah Turner, Wyatt Smith, and Logan Arnett are all two-year starters that have played a huge part in our success team over the last two years. Cody Lowe, Anthony Watkins, and Micheal Owens have also been with us for two years as well. Colby Alvis, Daniel Bell, and Dylan Williams have all played for the first time this year. These guys are all great young men, and we look forward to watching them grow into outstanding young men,” he said.

Straughn lost to New Brockton 23 years ago, 21-6. The Tigers went back and forth at Houston Academy last week, 33-27, while the Gamecocks suffered a 38-0 home loss to Pike County.