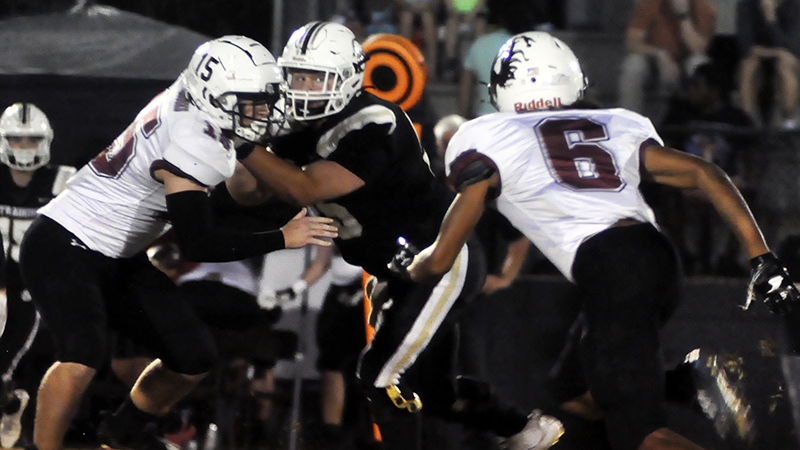 Straughn snapped a two-game losing streak and rolled to a 56-7 senior night win over New Brockton in the teams’ first meeting in 23 years Friday night. 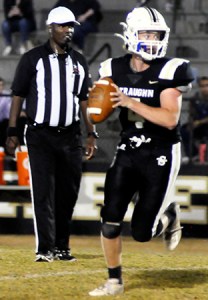 Sophomore quarterback Saxby Radford looks for a receiver in the Tigers’ region win over New Brockton.

Baylon Foster returned the opening kickoff 82 yards for a touchdown as the Gamecocks took a 7-0 lead 14 seconds into the game. Following a penalty, Aaron Olhava began the first home drive with a 32-yard run across midfield. Three plays later, Layne Grantham moved the chains with a 4-yard scamper and set up a 2-yard touchdown run from Olhava. Brenden Bartholomew converted the PAT and drew the Tigers even at 7-7. 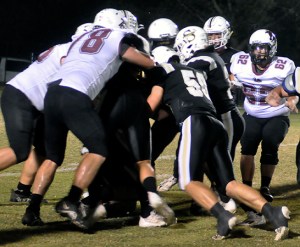 Straughn’s defense played lights out on the way to a huge region win over New Brockton.

New Brockton picked up a first down with a 34-yard pass from Yassiah Rousseau to James Downing on its next drive before the defense forced a turnover on downs. Grantham threw a 29-yard strike to Parker Black, and Olhava rumbled 18 yards into the end zone. Bartholomew was true as the Tigers took a 14-7 lead. Charlie Jordan then sparked the home defense with a 15-yard pick-six. Bartholomew added his third point after and left the score 21-7 after the first quarter.

Laeton Smith began the second quarter with a 26-yard interception return to the 17-yard line. Black started the drive with a 12-yard first-down run before Olhava crossed the goal line from five yards out. The extra point was good and gave the Tigers a 28-7 lead. The Gamecocks put together a solid drive with several rushes from Rousseau, but the defense forced another turnover on downs. After Grantham rushed 57 yards on two carries, Olhava added a 3-yard touchdown run for a 35-7 lead with 4:30 left until halftime. 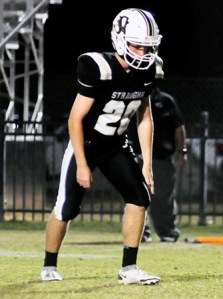 New Brockton reached the home 25 but could not convert on fourth and long. Olhava blitzed 79 yards to pay dirt just before halftime as. Bartholomew’s sixth-made PAT propelled Straughn to a 42-7 lead at the break. 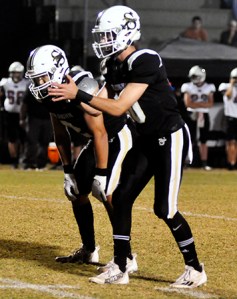 Aaron Olhava, left, and Layne Grantham were a big part of the Straughn offense who scored seven touchdowns on the night.

Grantham threw a 17-yard pass to Grant Barnes on the opening play of the third quarter. Nicholas Williams converted a third-and-1 with a 41-yard touchdown run for a 49-7 lead. The Tigers (5-2, 4-1 3A Region 2) entered several reserves as Saxby Radford ended the scoring with a 23-yard touchdown at the 10:20 point of the fourth quarter. The Gamecocks (0-7, 0-6) threw their third interception to Colby Alvis as the game shifted to a running clock the rest of the way.