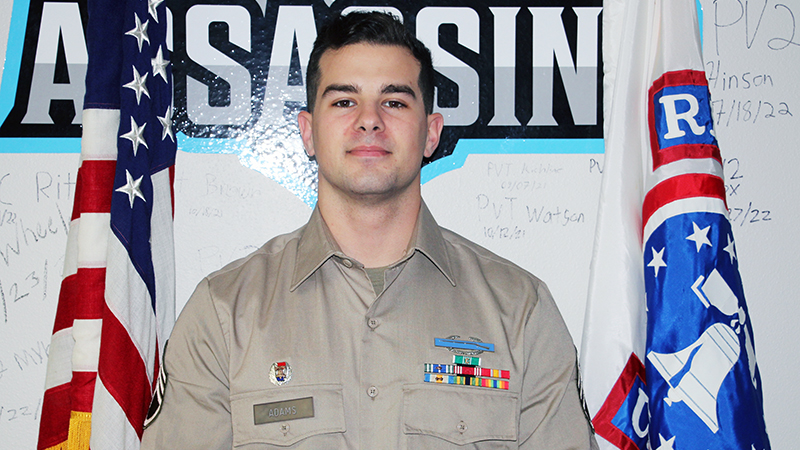 As a little boy growing up in Louisiana, Phillip Adams envisioned joining the military, and his service in adulthood led him to become Andalusia’s newest Army recruiter.

“I am grateful to be a part of this organization because of the opportunities it has for me through job training, education benefits, and training opportunities with foreign countries where I’ve learned customs and courtesies from people all around the world. My official title is Infantryman, but I currently hold the title of Recruiter, as that is my secondary military occupation specialist. I have served a total of five years and four months. I’ve been deployed to Iraq, and up until now, I was stationed at Fort Bragg in North Carolina,” Adams said.

Originally from Luling, Louisiana, his enlistment in the military first began in 2016.

“I entered the delayed entry program and didn’t ship to basic training until I graduated high school in 2017. Since I was young, I knew I was destined to join the military, but I chose the Army because I saw soldiers from the 82nd Airborne Division conducting humanitarian efforts when Hurricane Katrina devastated New Orleans in 2005. I was selected for recruiting by being in the top 10 percent of personnel in my MOS as 11B Infantryman.”

Adams’ first day in Andalusia was almost two months ago on Wednesday, August 10.

“The most enjoyable thing about recruiting is knowing that I am helping others achieve their life goals. Not everyone picks to kick down doors. That’s why the Army offers so many different jobs that by the time they complete training, they’re certified to do jobs in the civilian world that people will pay out of pocket to get training for. Despite what people think of the Army, it’s a home for everyone and not just those seeking a thrill,” he said.

He expressed what freedom means to him. “Freedom is the ability to express yourself and choose your own path in life. It allows you to have a personal identity that belongs to no one else. Freedom is the core of what America truly is and the ability to say and do things others don’t agree with.”

Adams reflected on several moments from his service, but one stood out in his mind.

“My most memorable experience in the Army was jumping out of a plane with a 105-pound ruck. In moments like that, you can’t think of anything but how much you wish your ruck was lighter. Afterward, you can’t help but look at yourself and realize you just did something that very few would dare or dream of doing,” he said.

For more information visit the Andalusia Army Recruiting Center at 226 East Three Notch Street or call the office at 334-427-1657.

“At the end of the day, the Army is the Army. It’s not meant for everyone, and there is nothing wrong with that. People forget soldiers are human beings, too. We have lives outside of our uniform and personalities that come from life experiences just like anyone else. We are sons and daughters of America, fathers and husbands, wives and mothers, and your neighbors and classmates,” Adams said.