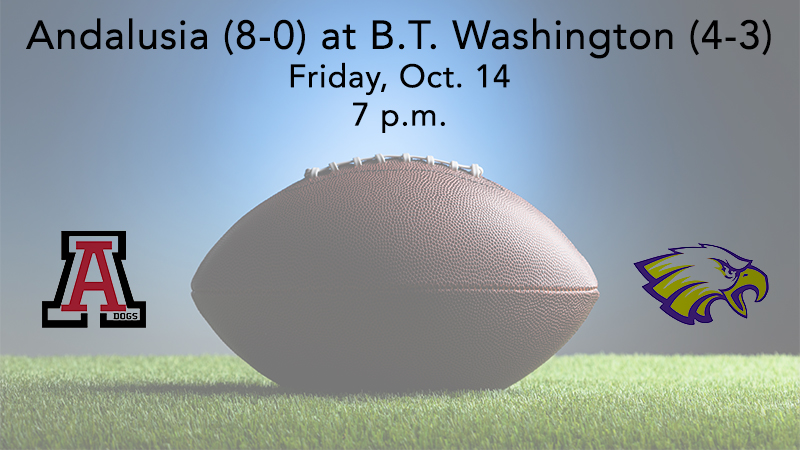 The Bulldogs and Golden Eagles meet for the third time ever with the series tied at 1-1.

“Booker T. Washington will be the best team we’ve played to date. Coach (Lawrence) O’Neal would probably say their biggest weakness is on special teams. That’s also a glaring weakness for us, so we don’t even gain an advantage there. They are more athletic than we are and probably more hungry right now. They have a chance to finish second in the region and have everything to play for. We have to find a way to meet that challenge head-on and do the things we need to do,” Head Coach Trent Taylor said.

According to Taylor, Andalusia’s biggest concern now is that starters have not played a full four quarters since their second game against Milton.

“It’s really concerning because that will change abruptly in the next two weeks against a very good Booker T. Washington team and a fantastic Catholic team. It’s hard for me to say right now if we’re ready to play four quarters. Our intentions were to get as many reps with the ones we could in the first half and kept finding different ways to score. We scored on defense and special teams, but once again, our offense didn’t take the field much,” he said.

He feels the Bulldogs must find a way to take a positive mental approach at practice.

“There have been games we got a lot of younger people in the game, which is a positive thing if we are doing what we need to be doing Monday through Wednesday. We haven’t been the last couple of weeks, and that’s on me. Hopefully, we grow up a little bit, and our coaches will challenge the kids over the next two weeks. It’s not about just getting to the playoffs but seeing where we finish at that point.”