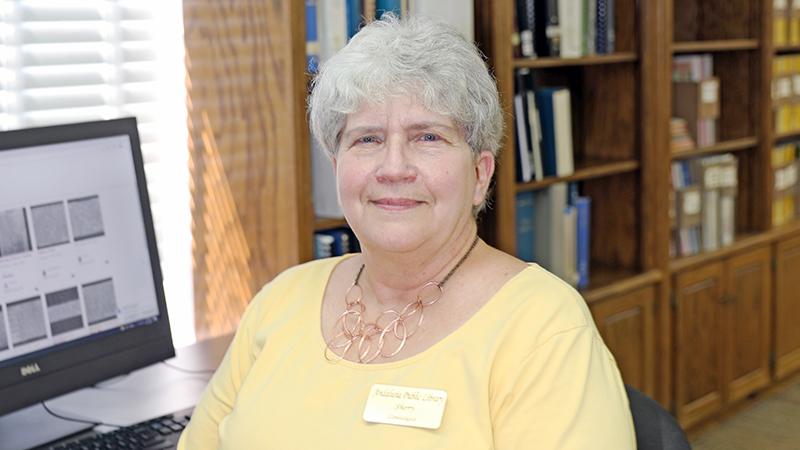 Sherry Johnston is the new genealogist at the Andalusia Public Library. (SUBMITTED PHOTO)

The veteran library genealogist recently joined the staff of the Andalusia Public Library. Johnston’s library and genealogy career began when she joined the Evergreen Public Library as a part-time employee.

“I did everything from watering plants to going up the stairs because I was the youngest or most agile,” she said. “A gentleman who was in the family history aspect was getting ready to retire and asked if I would be interested in learning about it.

“It turned out, I had a natural niche for it,” she said. “I have a photographic memory, so if I see a family tree, it stays with me.”

From the genealogy work, she became interested in cemetery preservation, and wrote columns for the local newspaper. Historic preservation became a part of her work and interests, and she gained a reputation as a household name for helping with historic research.

She retired from the Evergreen Library in April of 2021 with grand plans to stay at home and do as she pleased, perhaps assisting with research as a side line of work. But that plan was short lived when she was invited to do some work with the Thomas E. McMillan Museum on the campus of Coastal Community College (formerly Jefferson Davis Community College) in Brewton.

“I did that from January until August of this year,” she said. “One day Curtis (Thomasson) and I were talking and he suggested maybe I could come here and help.”

Thomasson, who has written a genealogy column for The Star-News for decades, contacted Mona Simon, library director, and put Johnston and Simon together.

“I came to talk with her, not with the idea of being hired, but with suggestions about the kind of person she would be looking for to work in the department,” Johnston said.

But Simon convinced her to apply for the job part-time.

Since early August, Johnston has been busy re-organizing the genealogy area, which fell into disarray when everything was moved to install new flooring. Linda Grimes had managed the area for years before her illness and subsequent death. With her loss, there was no one who knew about genealogy to restore order to the department.

“I am trying to introduce new methods of research with the use of technology, which is very user friendly,” Johnston said. “I’m also researching and getting to know more about local families.”

Through the Alabama Public Library Service, patrons can use library computers to access Ancestry, Heritage Hub, and other data hubs at no charge.

“We don’t have those services available for remote access at this time,” she said. “We also just got Proquest, which is a newspaper database. That’s a biggie. The days of going through pages and pages of old newspapers are gone.”

If someone wanted to visit APL for assistance with genealogy research, he should first decide who he wants to research, she said.

For instance, if someone chose to research his grandfather, John Doe, he would need to bring whatever information he had – like birth, death, marriage or military records.

“From there, we would develop a plan,” she said. “It’s kind of like a book report. You want to focus on one thing at a time, and organize it, so that you have a readable story at the end.”

Sometimes, she said, searches start at the end, with information found at cemeteries.

“That information can take us back to the beginning,” she said.

Johnston said the local library has many resources on file, like local city directories and church histories, as well as a good selection for military records.

“Most of that is online through Ancestry,” she said.

“These can be helpful if you had a relative who was distrustful of Census workers, but went to church,” she said.

The library also is growing its Native American and African American resources, she said, and will accept documents like store ledgers, church memberships, of photographs that people might be willing to donate.

Johnston is in the library 8 a.m. until 5 p.m., Tuesdays, Wednesdays and Thursdays, and can be reached by email at sherrell.johnston@cityofandalusia.com.