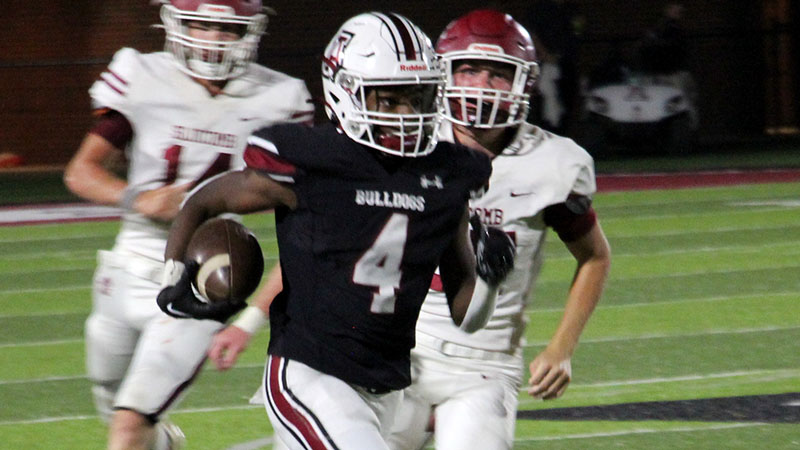 Tycameron Jackson runs past two defenders from a previous game for Andalusia. Jackson scored three touchdowns in the air for the Bulldogs who won their 600th all-time game in program history. (STAR-NEWS FILE PHOTO)

Andalusia picked up the program’s 600th all-time win and blitzed Booker T. Washington on the road in Tuskegee, 36-14, Friday night.

Andalusia (9-0, 6-0 4A Region 2) will host top-ranked Montgomery Catholic (9-0, 6-0) in the region championship game and regular-season finale for both teams next week.

“I’m really proud of our kids, but that bunch (B.T. Washington) has some good athletes. The starters did a great job shutting them out for almost the first time all year. I’m proud of what our guys did offensively tonight. It ought to be a lot of fun next week with Catholic. Getting the 600th all-time win in program history is impressive, and I’m super proud to be a part of that, so that’s really neat and a big deal,” Head Coach Trent Taylor said.

The Golden Eagles (4-4, 4-2) began the game with a three-and-out. After J’Marion Burnette ran for 15 yards, Jack Lathrop threw a 27-yard touchdown strike to Tycameron Jackson. Cedric Sinkfield added the two-point conversion as the Bulldogs took an 8-0 lead. B.T. Washington converted a third-and-long with a 23-yard pass from E.J. Hall to Tyrike McCullough across midfield. The drive stalled when the defense forced a turnover on downs.

Lathrop found Kaden Denson on the first play of the next possession with a 45-yard touchdown. Cobb Stewart converted the point after and took the score to 15-0 with 4:47 left in the opening quarter. Andalusia then forced a punt and converted two fourth downs with runs from Burnette on the next drive. Lathrop found Jackson open for a stellar 31-yard touchdown grab, and the extra point pushed the lead to 22-0. B.T. Washington had a big return and was able to carry the momentum past the red zone on its next drive. Once again, the defense kept the shutout intact with a huge stop at the 18-yard-line.

The Bulldogs took over six minutes on a 13-play, 92-yard drive and scored just before halftime. Lathrop capped the drive with a 26-yard touchdown pass to Denson on third-and-20 for a 29-0 lead. The Golden Eagles picked up one first down on a deep pass to end the first half.

Andalusia used eight plays and 60 yards on its opening series of the second half for another score. After a fourth-down conversion, Lathrop hit Jackson from 16 yards out and pushed the score to 36-0. B.T. Washington started its next drive with a big 30-yard run and converted a third down before another turnover on downs. The Bulldogs moved the chains once but punted before the end of the third quarter. The Golden Eagles began the final quarter with a 39-yard run and got on the board with a 32-yard run by Hall. The conversion failed and left the score 36-6.

Tyler Sigers recovered a fumble by B.T. Washington on the next drive before Andalusia went three-and-out. Hall threw a 6-yard touchdown pass to Tyrike McCollough, and a true conversion took it to 36-14, which was the final score for the game.

Andalusia finished with 382 yards of total offense to B.T. Washington’s 299. Lathrop went 15-of-19 passing for 249 yards and five touchdowns. Burnette led the rushing attack with 111 yards on 18 carries. Jackson was the top receiver with 149 yards on nine receptions and three touchdowns. Denson added four catches for 92 yards and two scores. Kameron Weaver led the Bulldog defense with six tackles and was followed by Blackston at five and Joshua Riley at four.