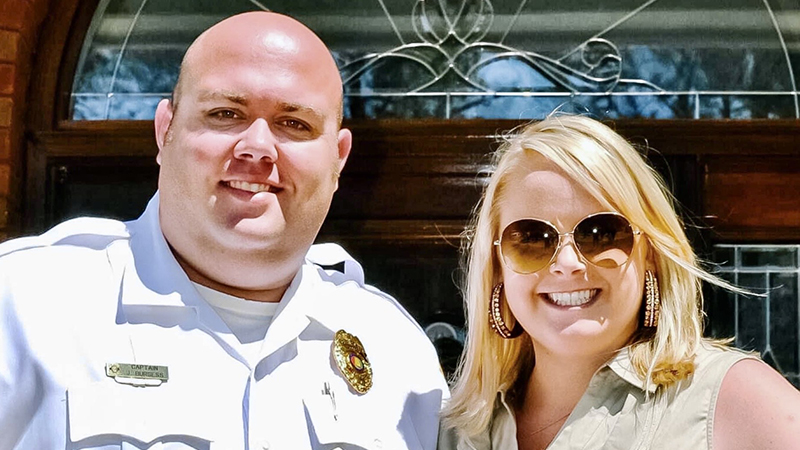 Opp Fire Department Captain Jonathan Wayne Burgess with his wife, Carrie. Burgess passed away in 2013 at the age of 33. (SUBMITTED PHOTOS)

Captain Jonathan Wayne Burgess of the Opp Fire Department and South Alabama Regional Airport Fire was remembered Saturday, Oct. 1, as his name was placed at the Alabama Firefighters Memorial in Tuscaloosa.

The firefighter memorial ceremony at the Alabama Fire College campus, where Burgess was remembered, was held for the 18th time this year.

In 2001, the Alabama Joint Fire Council unanimously agreed that a monument should be erected as a memorial honoring heroic Alabama firefighters. On June 11, 2003, the House and Senate of the Alabama Legislature passed a joint resolution designating that the Alabama Firefighter Memorial be placed on the beautifully landscaped grounds of the Alabama Fire College in Tuscaloosa. 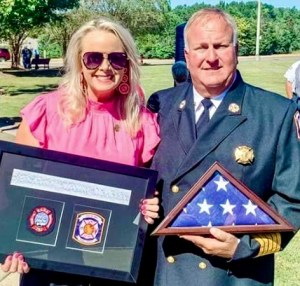 On Oct. 19, 2004, the dedication of the Alabama Firefighter Memorial became a reality. The bronze firefighter statue and Maltese cross were unveiled, along with the presentation of the Walk of Honor surfaced with personalized bricks donated by firefighters, friends, and families in recognition of Alabama’s fire service as part of the Memorial.

In 2006, the Joint Fire Council, with the help of public donations, erected two black marble obelisks on the grounds of the Memorial engraved with the names of Alabama’s fallen firefighters, dating back to 1901.

In 2012, a portion of a steel beam from the World Trade Center Towers was donated to the Memorial by the Terry Ferrell Foundation. The top portion of the steel was used to make crosses for family members of FDNY Rescue 4. Terry Farrell’s brother Brian asked that the steel be placed without a cover so that visitors could touch this piece of history. 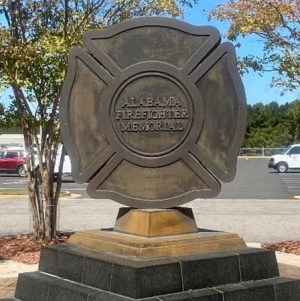 The Alabama Firefighter Memorial in Tuscaloosa.

In 2019, the Joint Fire Council and the Alabama Fire College Foundation undertook a project to expand the Memorial using these tax funds and funding held by the Foundation. The proposed expansion will place two more marble obelisks on the grounds as well as some much-needed groundwork at the memorial site.

Today, the Memorial stands as a tribute to and a reminder of the sacrifices made by members of the Alabama fire service.