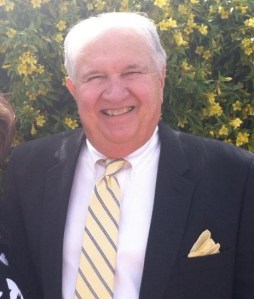 Mr. Meadows was born in Andalusia to the late James W. Meadows and Minnie Chisum Meadows. He was an alumnus of the University of Alabama and a member of First Baptist Simpsonville. He was a veteran of the Alabama National Guard and the U.S. Army Reserve. James began his sales career working with his father at The Taylor Shop, a men’s clothing store in Andalusia. After his father’s death, James and his brother continued the family business until 1981. He began his next chapter with Amoco until leaving in 2000. James furthered his career in sales with American Fibers and Yarns, retiring in 2008.

James was predeceased by his first wife, Carol Poythress Meadows.

The family will receive friends 5 to 7 p.m. on Wednesday at Fletcher Funeral Service.

A Celebration of James’ Life will be Thursday, 11 a.m., in the Worship Center of First Baptist Simpsonville. Burial, with military honors, will follow at Cannon Memorial Park.

The family will be at the Meadows’ home, 301 Saybrook Road in Simpsonville.

Fletcher Funeral Service is in charge of arrangements.